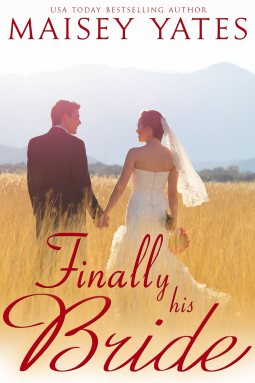 As the whole town goes crazy over the celebrity wedding event of the century, Melanie Richards decides she’s tired of blending in. It’s time go after what she wants. Her to do list:

Get a sexy dress

Luke Shuller can’t believe his eyes when he walks into Grey’s and sees his best friend trying to pick up some drunk cowboy. Melanie wants to start hooking up? She can practice on him. At least he’ll keep her safe. And as a bonus, their pretend relationship will help him deal with a family crisis.

But when pretend gets real, Melanie can’t tell where the charade ends and reality begins. When the dust settles, will she get thrown back into the friend zone, or will she finally get the man of her dreams?

Read on for my thoughts on Finally His Bride.  No true spoilers, promise.

Luke was certainly living in hell right now.  His ex-best friend, ex-business partner Beckett knocked up his sister Kaitlin – and she seemed just fine with the entire situation!  How Beckett felt after Luke’s fist punched his face might be another story.  Luke just didn’t get any of it.  And for tonight, he just wanted to get roaring drunk and pass out back in the motel.  He was tired of trying to fix other people’s troubles.  Except there was trouble in the flesh on the far side of Grey’s bar.  Melanie, his friend, the lady he always cared about, protected… on the receiving end of some drunken cowboy’s advances.  No way in hell was that going to happen.  So Luke stepped in once again to “fix” things.

Melanie was tired of the virgin thing.  She was a successful baker, known around the country for her fabulous wedding cakes.  She had her own business and she was content with it if not truly happy.  Mel was tired of being the scared little girl who’d been abused.  She was tired of being protected, tired of looking in on relationships from the outside – but mostly tired of waiting for Luke to see her for the woman she now was.  So if Luke wouldn’t pay attention then she’d find someone else to rid her of this pesky virginity and get on with living not waiting any longer.  That was  the plan until Luke showed up, scared away her cowboy and walked out of Grey’s with her on his shoulder like a sack of potatoes.  Oh, he was in a heap of trouble now.

I was so happy to finally have Luke and Melanie’s story told.  Admittedly, Luke came off as a hardass in Bride by Mistake (my review link), and I certainly wasn’t a huge fan of his – although I could tell he was in a lot of hurt himself and hoped his story would be told next.  Not sure then if I felt he deserved his own happy ever after, but I felt for the guy on some level.

And I was right, in that there was a lot more to Luke than meets the eyes.  I adored Melanie, she was tired of being afraid and took her bravery firmly in hand and went for what she’d always wanted – Luke.  It took Luke a frustratingly long time to finally admit that he was being a jerk.  Oh, he’d build walls and had reasons (read excuses) for how he behaved, but it took being hit full face with Mel’s love before he started to even begin to think he might need to give up some control over other people and start working on himself.

Finally His Bride is a story of coming face to face with yourself and being brave enough to change in order to get the absolute best out of your life.  I’d recommend this one for long time love story readers, anyone who appreciates a happy ending for someone who up until the very last moment you aren’t sure if they deserve the happiness they are about to get.  (maybe that’s a bit mean, but Luke was a first class ass for the majority of two novels – he only gets so much slack from me *grin*).  Pick this one up and sit back and enjoy the journey.  I sure did.

*I received an e-ARC of Finally His Bride from the publisher and NetGalley in exchange for an honest review. That does not change what I think of this novel.*

Finally His Bride is available for the Kindle