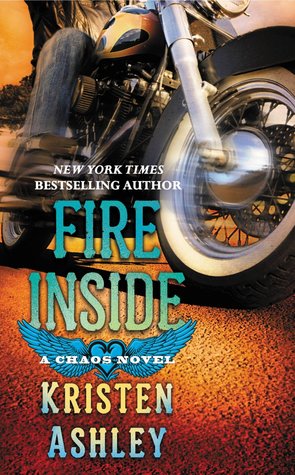 Lanie Heron isn’t looking for love-no surprise, considering her last serious relationship nearly got her killed. So when Lanie propositions Hop Kincaid, all she wants is one wild night with the hot-as-hell biker who patrols with the Chaos Motorcycle Club . . .

For Hop, Lanie has always been untouchable. She’s too polished and too classy for his taste. But when she gives Hop the once-over with her bedroom eyes and offers him a night in paradise, he can’t say no. And he doesn’t regret it when he finds that Lanie is the best thing that’s ever happened to him-in or out of bed. Now the trick will be to convince her of that.

Read on for my thoughts on Fire Inside.  No true spoilers, promise.

We first met up with Lanie in Motorcycle Man of the Dream Man series.  She is Tyra’s (Tack’s wife) best friend).  She’s also been through hell.  At one time she was planning a wedding only to be kidnapped, shot, and watched her intended, Elliott die before her eyes.  She stepped in front of him and took three bullets meant for Elliott and still watched him die.  Lanie comes with baggage and issues, not all caused by those experiences.  She is a drama queen, and good at it.  She is also Chaos.

Hopper is forty, has two kids he adores, a serious witch of an ex-wife and Chaos is his family and his life.  Lanie is a beautiful, classy lady and there is no way she should be wandering over to him and inviting him to one night of the sweetest sex he’ll ever encounter.  To be fair, Hop tried to talk her out of this crazy idea of hers but Lanie wasn’t listening as she sauntered off to the Compound where Hop’s room was – and God help him, he soon followed.

Lanie and Hop soon discover that one night together is not going to be enough – and they start on a strictly secret relationship.  It’s not going to  be easy, it will not go smoothly and it certainly will not be what either of them expected when they started – but it will be full of steamy sex, deeper feelings, baggage lost and nightmares turned into dreams.  If they can survive loving each other they can survive anything.

Fire Inside is an enjoyable, intense and emotional story.  Lanie is seriously screwed up in ways that Hop can help her get past if she will let him.  And Lanie is often her own worst enemy because she believes the crap she is spewing out at Hop.  I saw two people who probably should not have worked as a couple but they did.  It wasn’t long before I was mentally encouraging Hop and wanting to shake some sense in Lanie.

There is no denying that I am a Kristen Ashley fan and the Chaos men and women can really do no wrong in my eyes.  Yet I absolutely loved that these two people who should not have worked out as a couple turned out to be one of the emotionally satisfying couples for me.  Yeah, Lanie had issues and she was a drama queen supreme, but underneath that she loved Hop even when she didn’t see it yet.  Hop became a hero for me when he just never gave up on Lanie, even when it appeared that he had had enough.  He wasn’t going to let anything, including his Lady, deny what they had together.  A man loves you that much, he’s your hero.

I definitely recommend Fire Inside.  Hop and Lanie aren’t the younger members of the Chaos family, and they have more issues to sort through than many of the others – but they are strong characters who simply work and give us a great story to enjoy.

Fire Inside is available in many formats and for the Kindle

« Review: Own The Wind by Kristen Ashley
Romancing the Alpha An Action Adventure Romance Box Set by Various Authors »