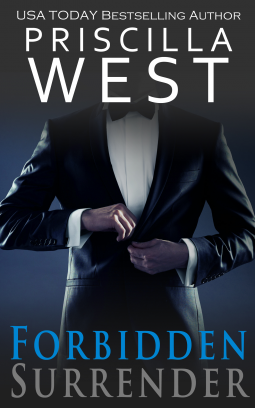 “What gives you a thrill Kristen?”

The minute I saw Vincent Sorenson, I knew he was trouble. Billionaire. Bad boy. And dangerously sexy. He was everything I craved, and nothing I needed.

Unfortunately, I couldn’t just avoid him. The higher ups at my company decided they needed his business, and I was on the team to bring him in. Vincent Sorenson didn’t seem as interested in business as he was in me, but I knew that was a door better left unopened. If I got involved with him, it would only unearth the pain I spent years trying to bury.

I thought I had it under control, but I seriously underestimated Vincent’s seductive charm and silver-tongue. I would soon find out how delicious it would feel to let myself fall into this forbidden surrender.

Read on for my thoughts on Forbidden Surrender.  No true spoilers, promise.

I can basically sum up Forbidden Surrender in one word or one sound actually… “Mmmmmmmm.”  Where do I find one just like that for myself?

The Surrender series of three stories tells Vincent and Kristen’s tale.  These three novels have been released for some time now, but time does not change a moment of the sexiness, loving tease of their story.  This first one is short, but packs a powerful sexual and storyline punch.

Vincent was wealthy.  Very wealthy.  He was also intelligent, educated, elegant and hot as sin.  He began as a surfer, more surfer than engineer according to his professors – but he did invent a camera that changed extreme sports for many of its most dedicated followers.  Although he still surfs and enjoys that lifestyle when he can – he is far from your average surfer dude.  Yet because of his fit, blonde good looks, some people are foolish enough to see the surfer dude when they should be seeing the billionaire.  You don’t become a self-made billionaire by being stupid.

Kristen was part of the team assigned to bring in his account to the wealth management company she worked for.  She had done most of the research and charts regarding how they could best advise him on the management of his money.  She and Richard, her superior on this team had traveled to South Africa to meet with Vincent.  Unfortunately, Richard tried to play up the surfer dude instead of the intelligent man during their meeting.  Kristen was stunned by Vincent’s sheer sexiness and practically fell into his lap.  Yet, she was able to save some part of the meeting.  But it didn’t look good at all.

If you haven’t had the pleasure of reading Forbidden Surrender yet, I would highly recommend you go out and fix that oversight very soon.  You will find a fast paced, intense, flirty, sensuous beginning to a couple’s relationship.  Remember, this is a three book series all about Kristen and Vincent.  While the first novel doesn’t end strictly on a cliffhanger, it does end abruptly.  You’ll want to find out what happens next, just as I did.  Indulge yourself in a sexy story that will hopefully lead to a love story for our couple – we’ll just have to read the next novel to find out.

*I received an e-ARC of Forbidden Surrender from the publisher and NetGalley in exchange for an honest review. That does not change what I think of this novel.*

Forbidden Surrender is available for the Kindle

For All The Cat Lovers Out There

Trailer: Give Up The Ghost

For All The Cat Lovers Out There

Trailer: Give Up The Ghost