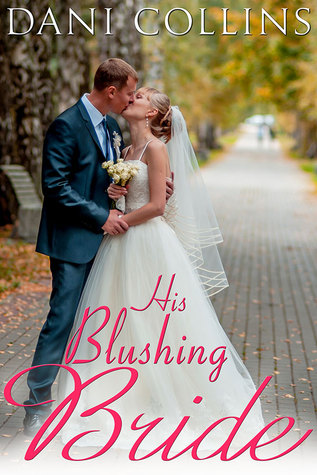 Piper Tierney is busy wrapping up the school year and planning the music for Marietta’s Wedding Of The Century. She does not need one of her parents’ backpacking hippies under foot. Except the guy they let stay in their house is so much more than the California couch-surfer he resembles. Before she knows it, she’s making time to make time, even though he’s only in town for a couple of weeks.

Taking a break from working on his doctorate in political science, Sebastian Bloom wants to reassure himself his sister isn’t making another mistake with her upcoming wedding to a Marietta rancher. He’s definitely not looking for a bride for himself. Marriage and family are a trap. But Piper is cute, funny, and wants to move on from her ex.

They agree to a no strings affair, but will they wind up tying the knot?

Read on for my thoughts on His Blushing Bride.  No true spoilers, promise.

Piper has lived an extremely isolated life.  Oh, she went to school, college and has become a high school music director/teacher just like her father.  Her mother has been very protective of her, keeping her home doing other things when she might have been going out with friends or to the prom.  There were reasons, but Piper still paid the price.  In addition to being a teacher’s daughter, therefore kept out of anything that she might “tell on” fellow students about their activities, there is one other thing that has always been part of Piper’s life.  She has a birthmark on the side of her face.  And we all know how cruel children, teenagers and heck, even adults can be about someone that is in any way “different”.

Now, at age 24, Piper has a life filled with doing things – ask her to do something for the school and her answer is usually “Yes.”  Her one relationship was very much one sided in that she seemed to be the one doing the most giving – only to be dumped when no longer  needed by the jerk.  And one other detail.  She’s still a virgin.  That is something she would very much like to change.  Piper is a beautiful lady, very insecure and unaware of her own attractiveness to the right man.  Not every one of them is a jerk, but she still has to learn that.

Piper’s parents are out of the country, and have emailed Piper letting her know that they have given permission for a fellow traveler to stay at their home for a few weeks.  It’s not totally unusual for this to happen, but this time it’s inconvenient for many reasons – but mainly that Piper is home alone living in an apartment above her parent’s garage – now with a stranger staying in the house.

Bastian is handsome, charming, sexy and not one bit interested in a long term relationship and never expects to marry.  He has reasons, some might even be good but he is determined to play the field.  And that field now included Piper since he is staying at her parent’s house.  The attraction between them is fast and strong, but he’s getting some mixed signals and maybe she isn’t as used to this game as he first thought.

I absolutely adored Bastian and Piper as a couple.  His sexiness, confidence and charm – her insecurities, cuteness and pure determination made a perfect match between them.  Yes, they have things to sort out but in the end Bastian finally understands what all the ever after stuff is all about – but will he believe it’s possible for him.  Piper finally met the man who saw the birthmark and it didn’t matter – it was simply part of her.  She finds herself falling for him, but knows that he doesn’t believe in forever.

This one I highly recommend for those who believe in love.  That’s all of us, right?  Grab this one, it’s worth your time.

*I received an e-ARC of His Blushing Bride from the publisher and NetGalley in exchange for an honest review. That does not change what I think of this novel.*

~What you, the reader, always must remember is this simple truth. Any review is one person’s opinion. You might feel the same or totally different. The only way to know for certain if any novel is for you – is for you to read it. This was my opinion of this particular book.~