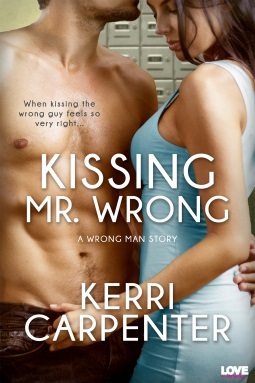 Three months ago, graphic designer Vanessa Hewitt slept with the ridiculously hot guy she met after nearly falling to her death while stargazing on a bridge. The adrenaline-fueled night of we’ll-never-see-each-other-again sex fulfilled every fantasy, but with her best friend’s wedding on the horizon, Vanessa can’t stop thinking about what would happen if her sexy stranger passed through town again.

Haunted by his time in Afghanistan, soldier John Campbell returns to his hometown just long enough to help plan an engagement party for his sister. When he realizes her best friend is the sweet one-night stand he’s been fantasizing about for months, he’ll do anything to have her again…though getting trapped together in a storeroom wasn’t quite what he had in mind.

Vanessa is in hell. Or is it heaven? Because with every touch, their forbidden connection grows, until kissing Mr. Wrong starts feeling more like kissing Mr. Right.

Read on for my thoughts on Kissing Mr. Wrong.  No true spoilers, promise.

Vanessa has just had a day from hell.  She’d been laid off from her graphic artist job, and in this small town of Crescent Falls there weren’t more jobs like that one to be found.  Sipping a glass of wine in the bar downstairs from her apartment, Vanessa felt the eyes of a stranger at the bar on her, almost senses his overhearing her conversation with Mike but didn’t pay a lot of attention to him other than to realize the guy was definitely handsome.  Mike had offered her a job at the bar to at least tide her over until she found work again in her field.  She wouldn’t be broke and jobless, and for that she was grateful but still… it wasn’t doing the art, the creating that she enjoyed.  When Vanessa shoved aside the wine and left the bar she wasn’t sure where to go.  Moping upstairs had it’s merits, but she needed to head to the one place she found peace – the bridge.

John hadn’t been comfortable with the conversation the beauty at the other end of the bar was having with the bartender.  He got that she had lost her job and in truth she looked pretty lost at the moment.  So he kept an eye on her, he knew the signs of despondency and he really just wanted to be sure she was okay – for whatever reason that he couldn’t really explain to himself.  When she left the bar he followed soon after.

The old stone bridge over the swift waters of the creek had been a favorite place to go to just think and enjoy ever since she had moved here.  So it really was no surprise that she’d return there on the worst day possible.  She had intended to sit on the stone wall and just let the day wash away, but in the middle of getting up on the wall she heard a concerned voice call out to her.  The hot, handsome guy from the bar actually thought she was going to jump.  Vanessa wasn’t offended and in fact was touched by his concern.  She continued to sit on the wall as she explained that she wasn’t intending to harm herself.  Through the embarrassed conversation sparks were sizzling.  Yes, he was definitely worth checking out.  In the middle of talking to John she took her attention off of where she was and losing her balance, fell over the side of the bridge.  John had grabbed her arm and slowly pulled her back over the wall.

Call it scared to death, call it adrenaline, heck even call it fate… but when Vanessa’s feet hit solid ground she launched herself into John’s arms.  The sizzle turned into a fire the longer she was held and kissed – and Vanessa did the one thing she’d never done, knowingly took a one night stand without a second thought.  The only thought that mattered was getting naked with this guy and he definitely returned that thought with even more of his own.  The night that followed lived up to every single one of Vanessa’s fantasies and then some.  She knew he’d be gone in the morning, but she had right now and that would be enough.  Or so she thought…

Three months later, Vanessa was planning her best friend’s engagement party.  Jess was excited yet there was a downbeat to her as well.  Her younger brother had finished his tour of duty but not come home yet and it bothered her a lot.  Sure they were both adults now, but family was family and she needed to see him to know he was okay.  Jess hoped he’d get back in time for the party but wasn’t holding out much hope.

When Jess’ baby brother did turn up it was Vanessa’s turn to be surprised.  Her one night stand … had been her best friend’s brother.  Now what?

I really enjoyed Kissing Mr. Wrong and would definitely recommend it to anyone who loves a good love story with a few twists.  The story was well paced, full of action and romance… and a twist that would not have bothered me at all, yet seemed to be the main contention of the story.  I’ll let you get to that part on your own.

John and Vanessa were smokin’ hot together and I really got caught up in their story.  This one is worth the reading time, check it out for yourself.

*I received an e-ARC of Kissing Mr. Wrong from the publisher and NetGalley in exchange for an honest review. That does not change what I think of this novel.*

Kissing Mr. Wrong releases on May 26, 2015 and is available for the Kindle