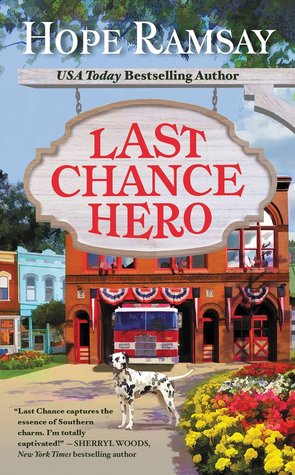 Ross Gardiner has had his fill of difficult relationships. Returning to Last Chance after a rough divorce, the town’s handsome new fire chief just wants safety and stability-a tall order given his dangerous job and the way he has the attention of all the single women in town. All except Sabina Grey, the girl who stole his heart when they were teenagers.

Sabina knows a lot about playing it safe. Always the good girl, she’s now responsible for her antiques store and caring for her sister. But having Ross in town brings back the memory of one carefree summer night when she threw caution to the wind-and almost destroyed her family. Now that they are both older and wiser, will the spark still be there, even though they’ve both been burned?

Read on for my thoughts on Last Chance Hero.  No true spoilers, promise.

How long does one have to atone for a mistake?  Sabrina had been the beautiful, popular high school girl who lived a charmed life – until the night that she selfishly went out and left her baby sister alone.  She was supposed to be babysitting, but the lark of skinny-dipping with her friends was too much to pass by.  That was the night of the fire.  The night that changed a slightly spoiled girl and scarred another in ways that went far beyond physical.

Ross and Lucy had slipped into comfortable.  Yeah, they had dated for over a year now but that didn’t mean that he was ready to dive back into the marriage thing.  Nope, he was content, Lucy had her plans and life was good as it was – until the town’s old soothsayer slash ancient matchmaker made her pronouncement and the whole town got wind of it.  Now he was heading for a wedding he wasn’t sure he wanted, wishing it was the sister and not Lucy he’d be waiting for at the alter.

Then the fires started.  Then suspicions lead to the woman he’d promised to marry – then all hell broke loose.

Last Chance Hero is such a fun story.  Set in the South, with all the flavor, traditions and sassiness that only a small town can produce, this is a story that will catch your attention and your heart so fast your head will spin.  A fun romance with a few twists and a mystery to solve.  This is the first Last Chance novel that I’ve read but it certainly will not be the last.  Now I have to go find the beginning and get caught up on Southern charm.

If you love a fast paced, light hearted romance with characters that make you chuckle then Last Chance Hero is perfect for you.  Pick it up and indulge yourself.

*I received an e-ARC of Last Chance Hero from the publisher and NetGalley in exchange for an honest review. That does not change what I think of this novel.*