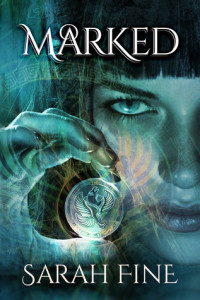 In a broken landscape carved by environmental collapse, Boston paramedic Cacia Ferry risks life and limb on the front lines of a fragile and dangerous city. What most don’t know—including her sexy new partner, Eli Margolis—is that while Cacy works to save lives, she has another job ferrying the dead to the Afterlife. Once humans are “Marked” by Fate, the powerful Ferrys are called to escort the vulnerable souls to either eternal bliss or unending fire and pain.

Unaware of Cacy’s other life, Eli finds himself as mesmerized by his fierce and beautiful partner as he is mistrustful of the influential Ferry clan led by the Charon—who happens to be Cacy’s father. Cacy, in turn, can no longer deny her intense attraction to the mysterious ex-Ranger with a haunted past. But just as their relationship heats up, an apparent hit takes the Charon before his time. Shaken to the core, Cacy pursues the rogue element who has seized the reins of Fate, only to discover that Eli has a devastating secret of his own. Not knowing whom to trust, what will Cacy have to sacrifice to protect Eli—and to make sure humanity’s future is secure?

*I received an e-ARC of Marked from the publisher and NetGalley in exchange for an honest review. That does not change what I think of this novel.*

Read on for my thoughts on Marked.  No true spoilers, promise.

I just closed the last page on Marked.  I came straight here because I wanted to write this review while everything in that world was fresh, vivid and emotional.  Once you read Marked for yourself, I believe you’ll understand on another level.  I don’t as a rule gush over novels.  Oh sure, I’ll love ’em to pieces – sing their praises – or scold their silliness – but I rarely, if ever, gush.  I hadn’t intended to spend my day reading.  But once in this alternative universe I found myself unable to leave until the last word.

Ms. Fine’s world building was amazing.  No, we are not told what caused the collapse of the environment – the way we are going today, I think our own imagination can take care of that small detail very well.  What we are given is a peak into the next life,  what lives in that grey area known here as the Veil – the colorlessness of it, the emptiness, the despair where one can almost touch its sadness.  The glimpse of blinding light, the automatic joy of the entrance to Heaven and the inferno and terror of the gate to Hell.

You have read in the story blurb that we as readers are aware of what few other humans are aware of – those entities that move us along a thread of life and death.  Those that mark us as ready for death – those that take us to death – and those that lead us to our just reward or punishment beyond death.  Here is mythology woven into the story, ancient gods who held mortal lives in the palm of their hands… these exist in the now as well in this alternative universe we have fallen into.

Cacy and Eli are at the center of this story.  There are very few scenes that do not in some way involve them.  Their attraction is strong, and runs deep.  Their families are center to this story – just how far will one person go to protect someone they love beyond life itself is a question asked… and answered.

There is a traitor.  Although I knew almost from the first chapter that there would be – I did not see the ending result coming.  Very little will play out as you expect it to – which is why I could not stop reading Marked today.

If you enjoy a deep, love story that by mo means runs smoothly but endures  – you will be swept away by this novel.  If you love to enter into an alternative lifeline where everything might look the same but little follows the rules you understand, then you’ll have a fun time.  If you want to go deeper into a story, to feel what makes people tick by observing the characters around them – there are a boatload of secondary characters (who matter to the story line) to keep track of along the way.

I hope that you will give Marked a chance to capture you.  It is the first in a series – the second, Claimed, is waiting for me on my NetGalley shelf ( thank goodness ) – that I believe will just get better as more is added to this universe.  I,  for one,  am looking forward to that ride.

Review: The One by Belle Ami

Review: The One by Belle Ami