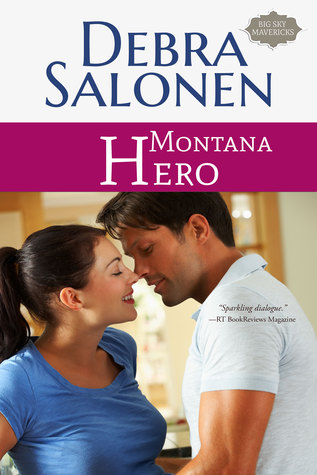 During Flynn Bensen‘s last wildfire rescue, a woman died despite Flynn’s best efforts to save her. He can’t escape his sense of failure or recurring nightmares, but he can escape to Marietta, Montana, to a new job as the head of Crawford County Search and Rescue. When he meets his scorching hot co-worker on his first day, Flynn feels like he might have just jumped from one wild fire to another that threatens to burn out of control despite his determination to keep a safe distance.

Outspoken, direct, and ambitious Kat Robinson isn’t thrilled to have a new boss—after all, if the timing had been different, she’d have been a shoe-in for Flynn’s job. But a single mom of a ten-year-old son knows where her priorities lay—with Brady, the light of her life. No way is she looking for a relationship and co-workers are always off limits. Too bad Flynn’s so darn hot, gorgeous, kind and authentic.

Will Flynn be the hero Kat needs to help her find the courage to fall in love again?

Read on for my thoughts on Montana Hero.  No true spoilers, promise.

Katherine escaped to Marietta after her mother died from complications of Alzheimer’s disease.  Knowing that both her mother and grandmother passed away from this disease, and knowing that she stands a better than average chance of contracting the disease has Katherine hesitant to ever enter into a long term relationship again.  In many ways her mother’s actions while under the influence of this heartbreaking disease will haunt not only her past but her present and future as well.

Her job at Crawford County Search and Rescue gives her satisfaction and the chance to now live in the town her mother had a connection to in her past and is the location of a mystery in her own life.  Her son Brady is her joy.  Brady has Aspergers, and while he is an above average intelligent young boy, the school and the stability of this small town is also a reason for Katherine to make her future here.  Now that the corrupt former head of the SAR is gone she has better hopes for the new man soon to arrive.  Hopefully life will settle down once again.

Flynn has made the decision to accept the job as the head of the local SAR in Marietta.  His brother has settled here.  And after the constant nightmares of the woman he could not save from a deadly wildfire, Flynn is ready to move on.  While this job will still allow him to protect and serve, as well as be available for occasional duties as a wildfire fighter, it won’t be his main focus any longer.  Perhaps this move will help ease the guilt of his failure, in his eyes, of not being able to save a woman who haunts his dreams.

While Flynn is attracted to Katherine, he knows the pain of getting involved with a co-worker and has the divorce papers and the loss of his inheritance to prove how stupid that would be.  Yet, Katherine and her son get under his skin and into his emotions.  Time will tell if repeating a past mistake would have different results, but for now his focus is on getting his teams together and comfortable working with him.

Brady adored his grandmother.  She would tell him stories of her time in Marietta.  And the hints she gave him have turned his active, intelligent mind to solving a mystery.  The results of his quest will forever change lives in this small town.

Montana Hero is the first story of another group of folks heading for Marietta, Montana.  As always there are several threads to past couples and future possibilities in any novel set in this amazing small town.  And we will find those threads that should weave through upcoming novels in this one.  So while it might seem that there is story building that isn’t played out in this story, keep in mind that Montana Rogue, – Montana Miracle – Montana Rebel are additional stories that will be coming our way over the next few months.  That I am really looking forward to.

So, back to Montana Hero.  🙂  I enjoyed Katherine and Flynn’s story so much.  They both have pain and betrayal in their pasts.  Now they are fighting the attraction between them.  Of course, the journey to true love rarely runs smoothly and it’s no different for this couple.  I found their hesitations to be honest and believable.  Yes, there is no doubt that these two can burn up the sheets, but sex is secondary to the overall life that they could build together – if they are brave enough.  Flynn’s acceptance of Brady’s specialness is touching and, in my opinion, the way a real man would act.  Once again, Ms Salonen delivers a fantastic, realistic story with characters who become family and friends in just a few chapters.  You cannot go wrong when visiting Marietta – in fact, I wouldn’t mind moving there myself.

*I received an e-ARC of Montana Hero from the publisher and NetGalley in exchange for an honest review. That does not change what I think of this novel.*