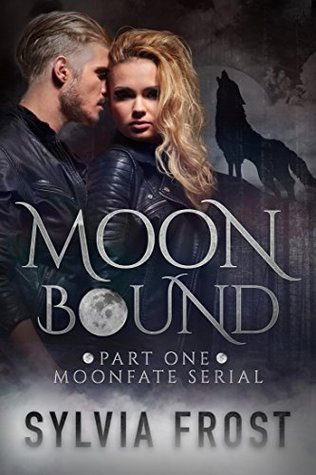 When werebeasts emerged from extinction to attack her family, Artemis Williams ran. From the Federal Bureau of Supernatural Investigation, her nightmares, and most of all her future as the mate of a werewolf. But after seven years of false alarms, Artemis decides to return home.

Unfortunately, that’s when destiny catches up to her and invades her dreams in the form of a dangerously sexy arctic werewolf. Her mate. He can set her curvy body on fire with a single look, claim her soul with a touch and Artemis knows it’s only a matter of time until he hunts her down in reality, too.

But he’s not the only monster lurking in the darkness…

Serials are a fun way to get a relatively short reading fix – always with a cliffhanger – and more to the story yet to come,  usually installments a few months apart.  Long enough to wait impatiently, short enough to keep the ongoing story interesting… and the reader wanting to know more about that world.

Read on for my thoughts on Moonbound.  No true spoilers, promise.

The Moonfate Serial starts with Moonbound.  We meet Artemis, a young woman whose parents were brutally  killed by were-beasts.  On the run from the authorities and from her were-mate, who’s mark has suddenly appeared on her wrist – Artemis goes underground.  After seven years she returns to her childhood home, with a room-mate, Lawrence.  Not a lover but a friend who is V-positive (vampire), they have kept each other’s secrets for years.

Orion, her were-wolf mate is nearby, and it’s time for him to claim his mate.

Because serials are so short and intense by nature – it’s unfair to go much further into the opening story.  Know that you will find an extremely hot, dominant, alpha male in Orion.  An especially sensuous, strong mate in Artemis – a murder, a kidnapping and the beginning of a hot, sexy relationship between the were-mates.  And a lot of other fun characters along the way.

The world-building is fantastic.  It was so easy to fall into this world with very few words.  I think anyone who loves shifters, werewolves, vampires, hot sexy alpha men and a strong heroine will love this Serial:  Moonfate.

are next in this serial – and can be found at Amazon for the Kindle.