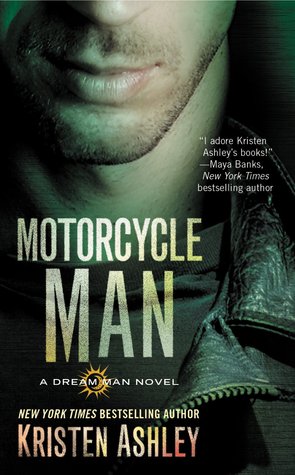 Read on for my thoughts on Motorcycle Man.  No true spoilers, promise.

Let me preface this review with a comment.  I understand that there are readers out there that do not like or want to read anything that has a motorcycle club storyline.  I respect that.  Everyone has their own tastes and lines in the sand that will not be crossed.  Now I know that in real life I could never be the woman of a motorcycle club member.  I’m not tough enough.  I didn’t say hard, there is a difference between tough and hard.  When I  pick up a book I am transported into another world where I can be, see, feel or do any damned thing that I please – unlike real life.  When written well MC novels are a fascinating, exciting, sexy peek into a world that co-exists with the rest of us.  Motorcycle Man is that kind of novel.  End of personal opinion.

If you’ve followed the Dream Man series, then you have run into Tack before.  He is arrogant, opinionated, rude, powerful and at times a complete jerk.  He can also be tender (his version of tender), kind, and in a fight you want him on your side. And totally, freaking Hot.  He has a habit of nicknaming ladies.. Peaches, Chestnut, Red for a few examples.  He has slowly, steadily changed Chaos Motorcycle Club from the foul pit that it once was to something with a reputation if not squeaky clean, at least a lot of steps up from what it was before his hostile takeover of the club.  He is a man who has his own kind of honor, his own sense of right and wrong and he is a force to be reckoned with.  The members of Chaos are by no means angels of any type – yet there is a loyalty, a sense of family that few people on the outside will ever understand.

Tyra walked into this family the night she went to a Chaos party, made her way to Tack’s bed and had the absolutely best night of her life.  Okay, so the morning after wasn’t so much to write home about.  Monday morning she would report to the office at Chaos headquarters and begin her training as the new office manager.  So what if Tack declared she was fired upon sight.  So freaking what if he never worked with anyone he had sex with.  Tyra stood up to him and simply refused to be fired.  And that caught Tack’s attention.  And now, Tyra is in for the ride of her life.

Throughout the Dream Man series there has been an underlying storyline of some serious crap going down in Denver – and each of the dream men have had their part in dealing with it.  Now in Tack’s story it comes to a stunning, satisfying conclusion.

Did I mention earlier about Tack’s version of tender?  Yeah.  He can be an absolute jerk, but when he turns to his woman and says stuff like that while she sleeps safe next to him.  That complexity of this obviously bad boy melts my heart.  Tack has a habit that you will pick up on throughout the story, when the reason for that habit is revealed I can pretty much count on you having tears in your eyes.  So many layers to this man, and to his and Tyra’s story.

This is a novel that you should read, no matter what your stance on motorcycle club novels is.  Yeah, the characters do belong to a MC – but that’s not all of it, that is only a portion of what this story is about — and you should discover that magic for yourself.