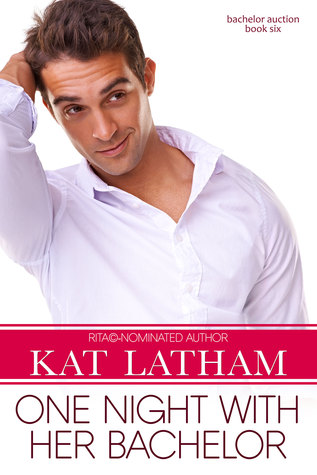 Bid on a date with this wounded warrior for an unforgettable night of adventure. Aim high—and bid higher!—because no one comes close to local hero Gabriel Morales.

Molly Dekker hates being the town charity case, but when her son Josh is seriously injured she has no choice. She lets her best friend organize a bachelor auction to help pay her massive bills and make Josh’s life more comfortable. She can’t bid on any of the men, but a surprise bidder gives her a gift she never expected: a date with the man who saved her son’s life—the only one she’s in danger of losing her heart to.

Former Air Force pararescueman Gabriel Morales made a career of flying to the rescue, until a tragic helicopter crash stole more than his livelihood. Being auctioned off like a slab of beef isn’t in his recovery plan. But one look, one touch and one night unlocking Molly’s pent-up passion makes him realize how badly he needs to be rescued…and how badly he wants to rescue Molly right back.

Will Molly and Gabriel’s never-quit attitude have them rushing head-first into love? Or will Gabriel’s secret pain stall their relationship before it can get off the ground?

Read on for my thoughts on One Night With Her Bachelor.  No true spoilers, promise.

I have loved every single one of the Bachelor Auction novellas.  But I must confess that I’ve been waiting for Molly’s.  (Yes, I was good and read them in order)

Molly and her son Josh have had their typical world changed in a heartbeat.  While on a Boy Scout camping trip Josh and his friend did what 10 year old boys do – they went exploring where they shouldn’t and without telling anyone.  The ground on top of the old abandoned copper mines had been weakening for years.  It was Josh’s bad luck to have stepped on a weakened spot of ground that fell away, dropping him several feet down into the old mine shaft.  Gabriel and his mom found them, and rescued them.  But Josh and Molly’s lives would be forever changed by that one decision.

Gabriel is fighting demons.  While we don’t know exactly what they are, we do get glimpses of them as the story builds.  After being released from the hospital after his military rescue helicopter mission went bad, Gabriel has spent time at his cabin, truly living off the grid in the mountains.  Few people know he’s back in town and he’s just fine with that.  When Lily tracks him down on a rare visit to town, he’s pretty much forced into taking part in this Bachelor Auction she’s putting together to benefit Molly and Josh.

I really don’t want to more of a tease than that.  This is a story that I really believe you need to read to experience the emotions of it on so many levels.

As the parent of a young man who has spent his life in a wheelchair, I could so easily identify with Molly’s feelings.  Been there, felt that… yeah, it’s not a place I would wish for any parent.  But it’s life.

Molly and Gabriel were made for each other.  While they have been wounded in different ways, they each need something the other offers.  But can Gabriel overcome the biggest demon of all and let Molly’s love finish up his own healing.

The emotions from this one were off the chart.  It has become my favorite novella of the series.  And I will never pass by a chance to revisit Marietta, Montana in any future book.  The people who “live” there are the finest bunch of folks you’d ever want to run into.

I would recommend this one for anyone who just wants to experience true love at it’s best.  It gets a rare 5 outta 5 on my rating chart.  Pick this one up – you won’t be sorry.

*I received an e-ARC of One Night With Her Bachelor from the publisher and NetGalley in exchange for an honest review. That does not change what I think of this novel.*

You can find it for the Kindle at Amazon

« Claimed by Sarah Fine
The Search for the Perfect Blog Theme »