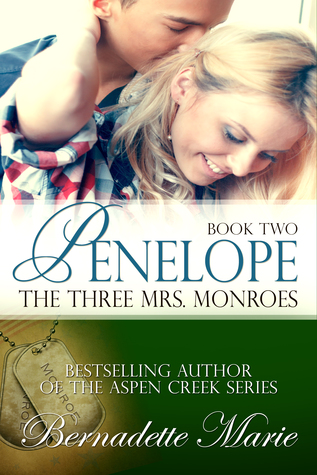 Penelope Monroe married on impulse and her heart had been broken by Adam Monroe’s lies. Pregnant she wonders how she will survive, alone, with her baby.

Brock Romero held Adam Monroe when he died in combat. Now released from the Army he makes it his priority to find Adam’s wife and share with her his last words.

On the verge of making the same mistake twice, Penelope must trust her heart—especially when new lies are uncovered.

Read on for my thoughts on Penelope~The Three Mrs. Monroes.  No true spoilers, promise.

Next up in this series is Penelope’s story.  All three novels in this series have no time span between stories, each moves into the next flawlessly.  Because of that these are stories that really should be read in order.  The combination of all three is what gives us one solid main story, told in three parts.

After his discharge, Brock Romero headed straight to Oklahoma.  His final mission was to deliver a box to Penelope Monroe, wife of the man who had saved him and had died in his arms.  His last wish was for him to return items to his wife, and a box.  During the time of recovery, those pictures of Penelope is part of what kept Brock sane and helped his healing.  Of course she was the pregnant widow of a man he looked up to, but Brock had also kinds of started to love the women in the photos – her beauty and her smile touched him on a deep level that he didn’t bother questioning, he just knew that it was his job to take care of her and her baby.

The romance between Penelope and Brock was handled so sweetly, and even in the circumstances – believable.  Each was attracted to the other almost immediately, Penelope was dealing with a lot and now add in a romance with a man she was convinced was only with her because he felt obligated to be there – between normal pregnancy hormones raging and the newness of an unexpected romance her emotions were simply off the chart.  Brock was solid, he was there for her no matter what.  While it might have been fast, he knew his feelings weren’t going to change anytime soon, except maybe to get deeper over time.

We had a glimpse of the craziness of Stella (Adam’s mother) and she will play a bigger part in this story, or her actions will at least.  Vivian is given some explanation of her husband’s actions over the years, and if all three women have not completely forgiven Adam for his selfish decisions, perhaps they no longer hate him quite as much.

Penelope~The Three Mrs. Monroes is a charming story of a woman who has always been alone finding the family and the man who can guarantee she will never be alone again.  The mystery heats up and I’m certain we are heading for an explosive ending in the final novel, Vivian’s story.  I’m enjoying this series, delivered in this manner very much and would not hesitate to recommend all three stories to romance readers who love that happy ending.

Penelope – The Three Mrs. Monroes is available in paperback and for the Kindle