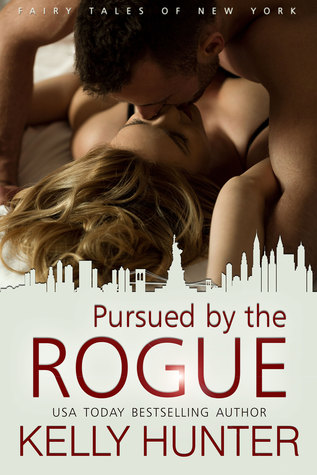 A no-strings affair between two dedicated professionals? It should have been the perfect solution.

Ugly duckling Dawn Turner doesn’t do relationships. She has her reasons and they’re good ones. But she can’t resist the magic in Finbar Sullivan’s touch, so she negotiates the next best thing with him. Scorchingly perfect, utterly casual sex.

World class musician Finnbar Sullivan always pushes the limits to get what he wants, and he wants Dawn. All of her. Love, commitment and a future together. So he reneges on the deal and composes a new one.

So what’s stopping her? And will Finn’s latest offer be enough to change Dawn’s mind?

Read on for my thoughts on Pursued by the Rogue.  No true spoilers, promise.

Four friends, from such different walks of life first began their friendship at a strict Catholic school,  One night with some stolen altar wine earned them separate dorm rooms, but the friendship stayed.  Years and distance separated them for a time, but now all the women are in New York City and it’s far past time that they reunited.

Pursued by the Rogue is Dawn and Finn’s story.  They had met and connected as teenagers,.  Finn thought she was beautiful, though she knew better and they had one unbelievable night together, each other’s first which made their coming together all the more beautiful.  They might have had a future, but Dawn’s determination to maintain her aloneness, even in her pain and Finn going off to Julliard to work his musical magic… well, Dawn broke ties with everyone and worked on her medical research, beginning her own company and still remained alone.  Her choice, her decision and she guarded that aloneness like a princess in an ivory tower.

Finn made certain to be at Sully’s, his family’s bar and the place where the reunion would take place almost ten years later. He’s never forgotten Dawn and very much intends to see her again.  And again, if his charm will work correctly.  He felt the connection all those years ago, and if he’s right and that feeling is still strong when he sees her again – there is nothing that will stop him from being a part of her life.   Except maybe – Dawn.

This is a novel that I do not want to give much away.  This one needs to be read, to be experienced and to feel as you read it.  I could completely understand why Dawn acted as she did.  I wished differently for her, but I got it.  So my trying to explain that to you is simply robbing you of an amazing reading experience.  Yes, this is a wonderful, charming love story – yet there are deeper layers to this story that are well presented, easily made part of the overall story in a way that is real.  Bad things happen to good people.  It’s called life – and we live it the best we can.  If we’re really lucky we get an amazing partner to share that life, the good and the bad with.  Such a man is Finn for Dawn.  She just has to be brave enough to reach out and say yes.

I can strongly recommend Pursued by the Rogue for anyone who reads romance, of any genre.  It is a emotional, satisfying read that will cause you to think just how you would have reacted in a similar situation.  A novel that is a joy to read and teaches a life lesson along the way — what more could you ask for?  Pick this one up, give yourself some quiet time and simply fall into Dawn and Finn’s story.  You will find a fascinating, enjoyable experience along the way.  Don’t forget the tissues – you may need some.

*I received an e-ARC of Pursued by the Rogue from the publisher and NetGalley in exchange for an honest review. That does not change what I think of this novel.*

Pursued by the Rogue is available for the Kindle