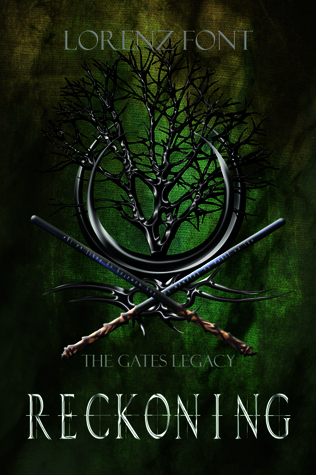 Read on for my thoughts on Reckoning.  No true spoilers, promise.

The world building of The Gates Legacy series is off the charts stunning.  With each novel this world just grows in volume, depth and characters.

In Reckoning we have the story of Cyrus and Isidora (aka Issy), both vampires.  Cyrus’ life as a vampire was forced upon him, and his need for revenge is deep and consuming.  Issy has the ability to read minds… which can be beneficial and annoying.  It’s not easy knowing everything someone thinks about you, the good and the bad, and not react to those thoughts.  Issy is determined to become Cyrus’ mate – but his need for revenge consumes him.  And eventually Issy must choose the direction her life will take, with or without the man she loves.

There are new challenges introduced in Reckoning.  And we run into other familiar characters as well.  There definitely appears to be some preparation work for the next novel in this series which just leads to the conclusion that this amazing series is not done yet, and thank the fates for that.

I loved this continuation of The Gates Legacy series.  Reckoning hit all the right notes for me, the story was intense and endearing.  The characters vivid, determined, and so realistic in their reactions to this world.  The story pulls you along and never lets go of your emotions along the way.  Think of a roller coaster with its ups and down and lightening fast speed – and then you’d have a slight idea of how your emotions will be engaged in this novel.

I believe you would enjoy any one of the stories in this series.  Can you start with Reckoning?  Yes, you could.  There is enough mentioning of past events that you’d have enough to enjoy this most recent addition.  But, ideally, I would suggest that you start at the beginning with Hunted.  When you start with the first novel and continue from there with the series you experience this world in all of its nuances, details and emotions.

I loved Reckoning.  I would highly recommend it and the entire series to anyone who loves paranormal, vampires and a uniquely created world with its own rules and people.  If you haven’t started this series yet… why not?  It’s simply stunning, entertaining, scary and has lots of love to share with us all.  Go on and get started or continue… it’s a journey well worth taking.

*I received an e-ARC of Reckoning from the publisher and NetGalley in exchange for an honest review. That does not change what I think of this novel.*

Reckoning is available for the Kindle

And if you haven’t started this series yet, the first novel Hunted is available for the Kindle at only 99 cents right now (not sure how long that price will hold so check it out)