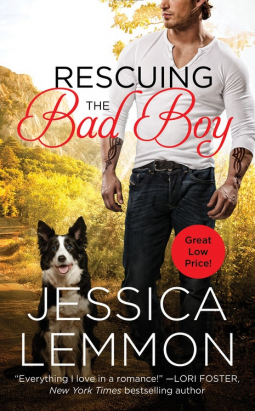 For Donovan Pate, the lake town of Evergreen Cove is a minefield of tough memories-including the day he had to let go of Sofie Martin. Years later he still can’t forget the taste of her lips and the feel of her killer curves. He knows he’s too damaged, that he should stay away for her own good. But what the head says and the heart wants are two very different things . . .

Seven years ago, Donovan broke Sofie’s heart. Now her career depends on playing nice in order to pull off the charity fund-raiser of the decade. She vows to keep things professional . . . yet working by his side every day doesn’t make it easy to fight temptation, and it isn’t long before she finds herself falling for this bad boy all over again. But loving Donovan means helping him face his past-so they can fight for a future together.

Read on for my thoughts on Rescuing the Bad Boy.  No true spoilers, promise.

Seven years ago Sofie Martin had dared everything on one night with Donovan Pate.  Oh, she knew his reputation and she believed she was ready to take that next important in a woman’s life with Donovan.  He might be the town bad boy but she was so sure she could take him on.  She was wrong.  A woman’s first sexual encounter was supposed to be perhaps awkward, a bit painful but also an exciting discovery with the right man.  And it was all that, right up to the moment when Donovan realized she was a virgin.  Oh, it didn’t stop him from continuing but his hateful comments afterward, the way he drove her back to her car in silence, the nasty attitude of “I don’t do virgins.”  She slapped him then, before running out of his Jeep to her car and watched him squeal out of the parking lot like the demons of hell were after him.  He broke her heart that night and she never forgot nor forgave him.

Now, here he is standing in her shop, telling her that he would not be allowing the elaborate event to take place at the mansion, his mansion now, and she could find some place else to honor his grandmother’s favorite charity – that was a laugh – because he wanted no part of it on his property.  It was totally beside the point that there was a signed contract, it was not happening.  There was no way Sofie was letting Donovan get away with this.  She would fight him, she had no choice.

Rescuing the Bad Boy unfolded like the petals of an onion, layer after layer – and there were definitely tears involved.  Donovan had been abused by his father and his grandmother had looked on and done nothing to stop the slaps, punches and falls down the stairs.  He had scars on the outside of his body and on his heart as well.

Throughout the novel we watch as Sofie works her magic on Donovan.  They will slowly discover each other’s past, their secrets and the reasons they  became the people they are today.  Slowly Donovan will go from a gruff man with a bad past to a warm, loveable man.  Hot, did I forget hot?  Donovan is one hot alpha male no matter where in the story we are – just thought I should bring that up.  Sofie is a treasure, her huge heart is her biggest asset.  Together they spark, burn and begin to open up to each other.

This is one of those stories that you just have to set aside some time and dive right in.  I finished it in one sitting and could have easily devoured more.  It would be easy to spoil the story by giving you too much.  Pick this one up, heck make sure you get the first novel in the series and the next ‘cos these bad boys and their ladies are nothing short of amazing.  Enjoy.

*I received an e-ARC of Rescuing The Bad Boy from the publisher and NetGalley in exchange for an honest review. That does not change what I think of this novel.*