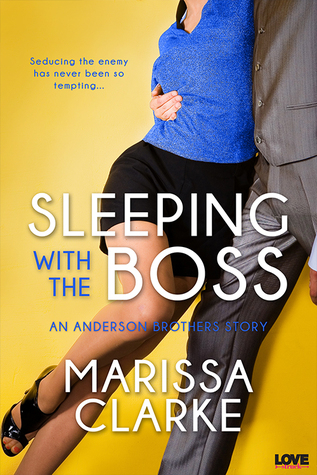 Seducing the enemy has never been so tempting…

For the last five years, bookish Claire Williams has been living for the dying. Now that her stint as caretaker is over, she’s off to see the world. She needs quick cash first, so a temp job at Anderson Auctions seems perfect, especially with the unexpected benefits, including the hottest man she’s ever laid eyes—or hands—on.

Former Marine William Anderson has been burned one time too many. His military training makes him the perfect man to flush out the spy undercutting his family business, but no amount of training can prepare him for the kind of undercover work he’ll have to do when the sexy new temp is implicated. Desire lands them in bed…but duty may cost him his heart.

Read on for my thoughts on Sleeping with the Boss.  No true spoilers, promise.

Claire’s life was in a holding pattern.  She’d spent years taking care of her grandparents.  Yes, she’d gotten her degree but for the most part she’d spent her days and nights caring for first her grandfather and then Sissy, her grandmother.  Hearing her painful cries had broken Claire’s heart and when she passed it was almost a relief to know that Sissy was not beyond the constant, searing pain.  It also meant that now Claire was free.  For the first time in as long as she could remember she was free to do what she wanted – and that was to escape New York City and head to Egypt, the land of her dreams.

But for now, until the life insurance money came in to fund that dream, Claire needed a job to pay the daily bills at her grandparent’s apartment so this temporary job at Anderson Auctions was heaven sent, plus the breathtakingly handsome man in the elevator who witnessed her extreme case of Claire-isms today made that temp job even more interesting.

Will Anderson was charmed by the beautiful klutz sharing the elevator with him.  And after her most outrageous klutz episode resulted in her skirt being ripped down the back seam, and a delightful hot pink thong reflected in the elevator doors – he was hooked.  Now he just had to figure out a way to get to know this adorable lady better, much better.

After being away on vacation, Will didn’t expect to be summoned to his brother’s office and told that they had a spy in the company.  Nothing truly illegal had happened, yet items up for auction were going to an outsider bidder far too often to be coincidental – and unfortunately, Ms. Klutz (Claire) fit the profile of the most likely person in the office to be that spy.  Will didn’t believe it was her, his instincts shouted no, no way… but then he was also attracted to Claire.  While starting a lighthearted romance with Claire, Will continued to search out the spy – but, there were just so many things that were suspect from his view.  But he intended to have Claire in his life, his bed and to prove that she couldn’t possibly be the spy.

I absolutely loved Claire.  She’s spunky, very klutzy and simply adorable.  She couldn’t spy worth a darn if she was indeed the spy, she’s too open and honest.  But, man, did she ever have some major circumstantial events happen to her that could be seen in two far differing lights.  Will was just hot, smokin’ hot from the first moment we met him.  He has his issues, but his unwavering trust in Claire really won me over.  Together they are a sexy, yes adorable couple who you just want to see happy and together.

Sleeping with the Boss is one of those feel good novels – a great couple with sizzling chemistry, an intriguing storyline that is easy enough to figure out but you can see where it pits brother against brother when defending a woman Will really wanted to believe in.  I would highly recommend this novel as one for the keeper pile.  I can’t wait to read the next novel in this series/trilogy.  If you enjoy a touch of mystery, a hot, hot couple with steamy sexy scenes and a love that defies all logic – then you’ll love Sleeping with the Boss.  Pick it up and discover this adorable couple for yourself.

Sleeping with the Boss is available for the Kindle

« So Many June 30th Releases!
Review: Hour of Need by Melinda Leigh »