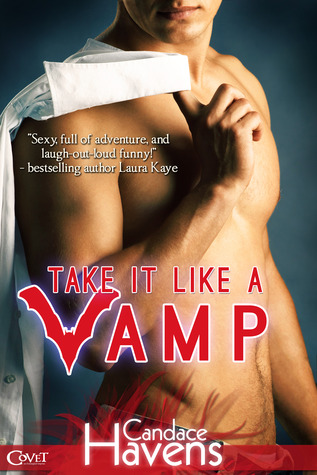 Vampire Nick Christos might’ve been born in the Middle Ages, but the good old days seem tame compared to the last eight years he’s spent ruling the Supernatural Council. His only respite is with his cute neighbor Casey Meyers, a woman he wants more than any undead man should. Sure, he’s forced to take a cold shower after every encounter, but there’s no way he’ll test his own strength by getting too close to a human, and he’s not willing to risk her life—not with bloodthirsty family on the prowl out to ruin Nick’s life.

When said Nick’s kin shows up, the innocent Casey is caught in the middle of a centuries old fight, and Nick’s biggest fear is realized. Now, instead of keeping his hands off his neighbor, he’ll risk everything to save the human he’s come to love.

Read on for my thoughts on Take It Like A Vamp.  No true spoilers, promise.

Let me say, right here at the start, that Take It Like A Vamp is one of the sexiest, most entertaining, purely fun paranormal romances I have read in a while.  I picked up the next in the series, Baby’s Got Bite a few weeks ago, and decided before I started the second novel to go find the first one.  I am so glad that I did because while the next novel would have been amazing anyway, now there are nuances and threads of the story that make more sense because of the connections with the characters in this first novel.

Handsome, hot gazillionaire Nick has been attracted, heck might actually have been in love with his cute, sexy neighbor Casey for months now – but the quirky, free spirited graphics artist only sees him as her friend.  Or does she?  Casey can’t help the tingles she gets any time she’s around her sexy neighbor, Nick.  I mean come on, he’s nice, got a hot bod and he’s always been there for her – unlike the loser guys she dates.  Why shouldn’t a girl get the tingles around a guy like that?  Yet there is a part of Casey’s heart that wishes for a bit more, oh she knows that it’s unlikely that he’d ever look at her in that light but still.. he is just about perfect.

So.. Once upon a time Cinderella (Casey) went to the ball with her prince (Nick) and it changed their lives forever.

Okay, okay so in reality Nick threw caution to the wind and begged Casey to go to a fancy affair thing being held for the Council he is a part of, a society thing with supernatural undertones – that being the wise man he is, he hasn’t mentioned that part – and his friend agrees to help him out this one time.  Once she said yes, Casey was whisked away to be pampered, dressed in a beautiful gown and bejeweled in a way that brought her natural beauty to the forefront in a stunning transformation.  Nick always knew she was beautiful, tonight she was stunning.

Tonight will change everything and start Nick and Casey on a journey to happiness – and danger, the likes of which Casey never knew even existed.  Tonight Casey will come face to face with a vile, evil witch, be dressed to the nines by a designer werewolf and begin the tumble into love with a Vrykolakas (a werewolf with vampire tendencies).  For a woman who does not see her true worth, Casey will feel the full power of Nick’s attraction and his unease as well.  Nick knows that Casey is the woman for him, his mate but he is afraid that she will hate and fear his beast.  For all his money, power and charm , Nick is just as unsure as any other man faced with wooing his intended.

Take It Like A Vamp is rich in dialogue, storyline, characters who will charm or disgust you, a couple that you will cheer for and a villainess you will hate with all of your being.  The secondary characters come alive and at times vie with the main couple for your attention.  I hope there are several stories to come in this series.  I know there is at least one, I’m hoping for a lot more.

Every paranormal romance creates it’s own unique universe.  The supernatural touches added to Ms. Havens’ world are equally charming and frightening… and always present.  I really enjoyed this story and if you enjoy paranormal romances I believe that you might be captivated by this series as well.  Take a risk, set aside what you know and fall into Take It Like a Vamp for a completely enjoyable adventure.