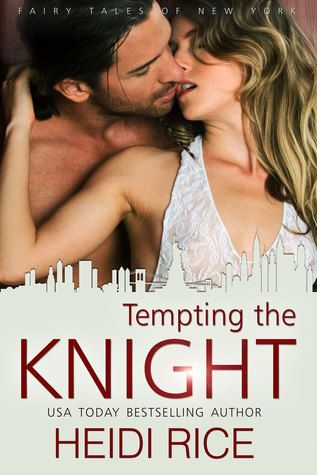 Once upon a time, poor little rich girl Zelda Madison wanted someone to love her, until she discovered being a badass was much more fun.

Ten years after getting kicked out of convent school and torn away from her three best friends, Zelda has worked hard to clean up her act, but her wild streak has never been completely tamed and — one midnight swim on Manhattan Beach later — she’s suddenly in urgent need of a knight in shining armor…

Hard-working legal aid attorney Tyrone Sullivan is the last guy she should call. Not only does he hold a grudge when it comes to Zelda leading his little sister astray all those years ago, he’s also supremely pissed about having to rescue a runaway supermodel from a Brooklyn police station at two am. But when Ty reluctantly agrees to bust Zel out of her ivory tower and let her hide out on his house barge for a few days, she shows him the wild side he didn’t know he had.

Zel discovers there’s nothing hotter than tarnishing a good guy’s armor… Until he starts to steal her bad girl’s battered heart.

Read on for my thoughts on Tempting the Knight.  No true spoilers, promise.

Spunky, sexy, totally badass Zelda Madison was such a refreshing heroine in Tempting the Knight.  We have become so used to the strong Alpha male in our reading pleasure – and I certainly intend to continue to enjoy those Alpha men, thank you very much.  But it was so amazing and awesome to find such an Alpha woman as Zel… we need more bad girls like her in our reading material.  Not a nasty girl, she was never that, but a woman who showed her strength, even in her weaknesses.  She is a power to be reckoned with by any man – especially knight in armor, Ty Sullivan.

I believe the reader can easily see just how strong Zel has become, and what she has overcome much easier than Zel can.  Of course, that’s the power of the story.  She and Ty were so powerful together.  Yes, they are definitely in the steamy sexy top ten – but that’s not all they are.  Underneath the overpowering sexual tensions between them is also the beginning of acceptance of who they are individually.  Both suffer from misconceptions of their past, each has deep regrets that they have and will get past, and in the end taking a chance is always worth the risks and the rewards.

I strongly recommend continuing the Fairy Tales of New York series with Tempting the Knight as quickly as you can get to your favorite retailer.  You will find a story that is stunning in its emotional pull, and charming in it’s reversal of the Alpha roles commonly seen between the sexes.  It was a delight to see a bad girl get her good man and live happily ever after.  Pick this one up and get ready for an amazing ride that you won’t soon forget.

*I received an e-ARC of Tempting the Knight from the publisher and NetGalley in exchange for an honest review. That does not change what I think of this novel.*

Tempting the Knight is available for the Kindle

« Review: Pursued by the Rogue by Kelly Hunter
Review: The Tycoon’s Secret by Melody Anne »