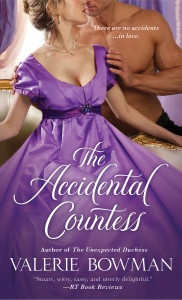 I recently finished up the second novel in Valerie Bowman’s Playful Brides series:  The Accidental Countess.

For seven long years, Lady Cassandra Monroe has waited for the man of her dreams to return from the war. Unfortunately, he happens to be engaged to her flighty cousin. What Cass wouldn’t give to take her cousin’s place! When he mistakes Cass for Patience Bunbury, a fictitious friend her cousin has invented to escape social obligations…even with her future husband, Cass thinks this is her chance.

After defeating Napoleon at Waterloo, Captain Julian Swift is not quite ready to settle down and enter into his unwanted arranged marriage—especially when the real object of his affection turns out to be a beguiling beauty he meets at a party. Patience Bunbury is witty, independent, passionate…and, unbeknownst to him, the cousin of his current fiancée. When the truth about Cass comes out—and Julian discovers that their courtship is anything but accidental—will he surrender his heart to a woman who really is too good to be true?

I totally enjoyed this next installment in the series (and hope it’s not over after the next ‘cos there are more ladies who need their stories told!)

Read on for my review.  No true spoilers, promise.  🙂

Oh what a tangled web we weave…

It seemed perfectly logical, at the time.  But then, most of Lucy’s schemes seem logical until they blow sky high!

Lady Cassandra Monroe has been in love with Captain Julian Swift for… well, forever it seems or at least since their first kiss (grudgingly given on her forehead on his part) at Cass’s sixteenth birthday party.  Unfortunately Julian is unofficially engaged to her cousin and therein starts the fun in this novel.

Penelope has no intention of marrying Julian – but she’s not quite ready to face him and tell that bit of information to him.  So what’s a lady to do?  Why create an imaginary friend in dire need who summons her dear friend Penelope to her side.  When Penelope leaves her home in the middle of a tea party with friends to run off to places unknown, and her perhaps intended suitor is scheduled to arrive in minutes – leave it to Lucy Hunt, the new Duchess of Claringdon to give the situation the perfect spin and allow Cass to spend time with the man she loves.  Oh, one small detail about these ladies, they all will be pretending to be someone they are not.

Julian returns from the war determined to end his sort of engagement to Penelope, for he is in love with someone else.  Someone who has written him countless letters during his time in battle, saved his life through her words in many ways and who he now intends to court for her hand in marriage.  Cassandra.  As I said before, “Oh what a tangled web we weave…”.

But it does set the stage for a delicious romp through the pages of The Accidental Countess.

I really enjoyed this noel.  It was packed full of misunderstandings, unrequited love, missed signals and plain fun.

Of course we expect our hero and heroine to get together in the end.  But how this couple got to that point is sweet, sexy, and touching because so many times the brain tells us what the heart refuses to believe.

I believe you would enjoy this next installment of the Playful Brides series by Valerie Bowman.  I know I certainly did.  🙂