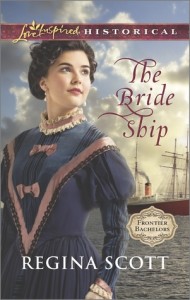 What was his brother’s widow–his first love–doing on a ship full of prospective brides headed out West? Clay Howard had been tasked with escorting the Boston belle home, but he didn’t anticipate Allegra being so strong-willed–or that he’d wind up traveling with her just to keep her from leaving without him!

Allegra Banks Howard isn’t going to let Clay interfere with her plans for a new life with her daughter on the frontier. True, Allegra needs his wilderness savvy, but if Clay thinks he can rekindle what they once shared, he had better think again. Because risking her heart for a second chance at being his bride isn’t something she’ll undertake lightly…

Read on for my thoughts on The Bride Ship.  No true spoilers, promise.

The Bride Ship set sail in January of 1866.  Really think about that for a moment, let the date sink in.  The Western states and territories of the United States were truly wild and barely civilized.  The streets weren’t paved with gold, but most often mud.  Many men had headed out for the West to make their fortunes or at least a decent living.  Those men were now looking for wives, and it was not unheard of for prospective wives to be advertised for back on the East coast hoping to entice women to head West.  A sad fact was also that more land was awarded to a husband and wife than to a single man – so some unscrupulous men were not interested in a long lasting relationship, but instead a bed-mate, cook, washerwoman, domestic help, the bearer of future generations… they weren’t all looking for love.  The women who answered these ads were leaving everything they knew behind for a chance at a future, often desperate to escape what they knew and praying for a better future.  Whether from desperation or a longing for something more, all of the women on those ships were the bravest of souls.

Allegra was Boston born, a widow with a young daughter.  While she knew her way around Boston’s high society, it was that very thing that had her waiting to board a ship that would take her and her daughter, Gillian, west to Seattle.  She had paid almost all the money she had to Mr. Mercer for passage on this ship and was praying for a safe future in the West, far away from the influence of the Howard family.

Clay Howard was the black sheep of his wealthy, prominent Boston family.  He almost married Allegra years ago, but simply could not face another day of the useless life of Boston’s society nor of his family’s constant interference.  He asked her to come with him, but she had refused.  Shortly after Clay left she married his brother Frank and they started their family.  After Frank’s death in the war, the Howard family tried to take over Allegra and Gillian.  He tried to understand why she had run from the only family she had, but Allegra refused to go back so Clay went forward with them to his home in Seattle.

I enjoyed The Bride Ship.  I was more taken with the bravery of the women than the actual story of the two loves, Clay and Allegra.  This story is about the passage to Seattle, the lies uncovered, the daily ship routine for these ladies.  It is about a man and woman, depending upon God to guide them and doing their best to understand His plan for them.  It’s about the healing of a little girl and the desire of freedom for the woman.  The story unfolds slowly, we come to know so many of the other women onboard and their reasons for taking this life changing journey.  We also come to see how greed can take over a family, having them choose pride over love.  I gave this one a 3 outta 5 on my rating scale.  It was a good story.

This novel is available in paperback or for the Kindle

Signing Up For Bloggiesta Spring 2015

Signing Up For Bloggiesta Spring 2015