Review: The Core by Kate Thomas 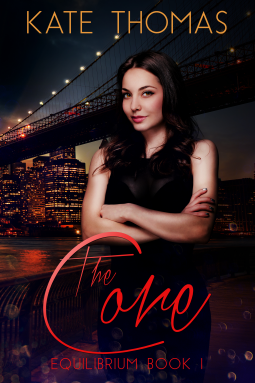 There’s something strange about David, something that goes beyond the way he makes Ellie feel. He’s wealthy, poised, and a complete enigma. With nothing to lose but her heart, Ellie goes in search of the truth—a search that leads her down an eye-opening path that reveals secrets about the world she thought she knew.

The world’s order is held in careful balance, the essence of good and evil tilting the scale. When the fabric of reality is stripped away, Ellie is forced to make a decision to follow the path David’s constructed before her or simply walk away. The Core is missing and someone must step up and stand between the light and darkness, holding each back and maintaining equilibrium.

Read on for my thoughts on The Core.  No true spoilers, promise.

There are battles constantly being waged that mortals rarely ever know about.  They go about their daily  lives never knowing how close they are to utter destruction and mayhem.  They have no clue as to how the balance between good and evil in their world is kept in place, or that such a reality actually exists.  They simply go about their lives as if nothing will ever change.  Mortals are so clueless and so wrong.

Ellie has nursed a crush on David Kelly forever, well at least since she started working for him about two years ago.  What’s not to be attracted to?  The guy is wealthy, handsome, sexy and very mysterious… maybe too mysterious.  Even though Ellie is his assistant, even she doesn’t really know where his wealth comes from or even what the company she works for truly does.  Too many mysteries and not enough answers.

Matters come to a head when Ellie sees David covered in blood, obviously not his.  He doesn’t appear harmed, but she is making sure that David has no clue she has seen him in this state.  She convinces her twin brother to help her stalk David, follow him around to see what he really does – because now she’s not only still attracted to him, but a bit afraid of him as well.

What she learns will change her life – forever.

Paranormal stories have always been my first reading love.  I love when romance is involved, but it does not have to be the main focus of the story.  In The Core, there is attraction – not a full blown romance, yet.  This is the first introductory story into the Equilibrium five novel series.  Here we are being given the basic background which the rest of the series will stand on – so see this short, fast paced story at just that.. the very beginning to so much more to come.

I definitely enjoyed this new world that is being built.  It has its own rules and players, and is a bit different than many paranormal stories.  The characters are engaging if somewhat still in their early stages of development as far as the purpose within the story is concerned.  That does not mean that the people of this world are not well created, they certainly are – it means only that knowing this is a longer series leaves the characters room to grow into what they will become within the series.  And I enjoy that type of development.  I am looking to the following books in this series as it has the potential to be an exceptional world.

If you love paranormal, if you enjoy being in on the beginning of something special, if you can emerge yourself in an alternative reality and if you enjoy waiting for the true love romance to build then you would completely enjoy The Core.  I recommend this one without hesitation, mainly because I can see what might be an amazing series and I love to be in on the start of that discovery.

Kate Thomas has several pen names aside from this one for paranormals – she also writes as L. A. Starkey, Isabella James and Lauren Elizabeth.  So if you enjoy this story and the beginning of this particular series you can look for her other author names titles.  As well as another series Resounding has begun with a novella and the rest of this paranormal werewolf, vampire filled eight book series throughout 2015 and 2016.  You might want to check that out too.  I certainly did.

*I received an e-ARC of The Core from the publisher and NetGalley in exchange for an honest review. That does not change what I think of this novel.*

Review: The Light by Kate Thomas

Review: The Light by Kate Thomas