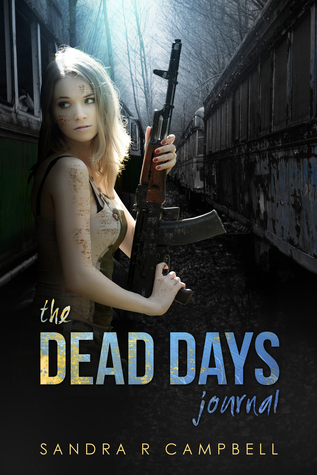 The daughter of a radical doomsday prepper, Leo Marrok spent her entire life preparing for the end. A skilled fighter and perfect marksman, Leo is her father’s second-in-command when Armageddon comes to pass. Together, they lead a group of survivors to a secure bunker deep in the Appalachian Mountains.

Vincent Marrok is willing to take extreme measures to repopulate their broken world. Leo’s refusal marks her as a traitor. With father and daughter at odds for the first time, their frail community is thrust into turmoil. Until the unthinkable happens, a blood-thirsty horde arrives. The impending attack will destroy all that they have worked for.

To protect her home and everything she believes in, Leo puts her faith in the arms of the enemy—a creature only rumored to exist—the one she calls Halloween. An alliance born out of necessity evolves into feelings Leo is ill-equipped to handle.

The Dead Days Journal is a post-apocalyptic story of love and family told through Leo Marrok’s first-hand account and the pages of Vincent’s personal journal, giving two very different perspectives on what it takes to survive.

Read on for my thoughts on The Dead Days Journal.  No true spoilers, promise.

The end of the world as we knew it has finally come.  The landscape is ravaged, billions have died and no one knows when the next disaster will strike.  Some have survived.  Those who the world laughed at during the good times, the preppers, the survivalists – they are the ones still alive, for now.  But for how long?

One small band lead by Vincent Marrak has holed up deep in a bunker hidden inside a cave.  There are crops, there is game in the woods.  Perhaps they no longer have all the comforts of home, but they are surviving.  Leo (Lenora), Vincent’s daughter is out on supply run going through local homes and bringing back what can still be used.  Their supplies won’t last forever. Ben is a survivor they picked along the way to the bunker.  He and Leo are interested in each other – love, perhaps.  But she has been busy surviving and Ben will be there when she’s ready.

There is… something… in the woods.  Two survivors were away from camp overnight and were attacked.  Only one survived, but he brought back tales of the horde that swarmed over them, killing his companion.  The horde – completely unnatural and deadly.

The Dead Days Journal was a very interesting novel.  It is not a romance, or at least as how I would define romance… but there is attraction there.  It is not only a post-apocalyptic tale either, although it is a strong theme throughout the novel.  There is more paranormal involved in this story than one might think at first.  There are creatures within this tale that we have called by one legendary name throughout time – but they are not quite that either.  This one is unique, well thought out, detailed and even – totally believable, given the end of the world.  I don’t really have the words to say much more except – this novel is probably unlike any you have read.

I enjoyed the story, the world building and the sense of purpose in this novel.  I also had to admire how the introduction of the horde was handled and explained.  It leaves so many possible paths open for the next novel.  And I’m really hoping for more about Leo and Orrin and… well, pick up the novel and you’ll be curious too.

*I received an e-ARC of The Dead Days Journal from the publisher and NetGalley in exchange for an honest review. That does not change what I think of this novel.*

The Dead Days journal is available for the Kindle from Amazon

« Why I Will Always Self-Host My Blog
Review: Red Carpet Day Job by Tasha Cotter »