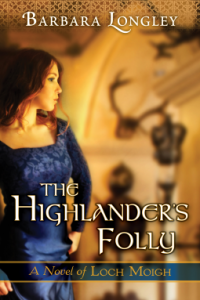 A brave fifteenth-century Highlander fiercely devoted to his foster family, Hunter of clan MacKintosh can defeat any man in battle. Thanks to his fae gifts, he can read the intent of his opponents and guess their next moves. But when the faerie Madame Giselle sends Hunter to the present day, he stumbles into a staged battle and rescues a young knight—only to discover that the knight is a woman, and she’s anything but a damsel in distress.

Meghan McGladrey learned martial arts and sword fighting from her father, a time-traveling Highlander himself. To Hunter’s surprise, Meghan is as skilled as any knight. When both of them are pulled back to the fifteenth century, Meghan becomes desperate to return to her time. Hunter, who is pledged to another, begins to fall for the beautiful, brave warrior as they fight side by side against a common enemy. Now, he must decide which matters more: his honor, or following his heart.

*I received an e-ARC of The Highlander’s Folly from the publisher and NetGalley in exchange for an honest review. That does not change what I think of this novel.*

A fierce Highlander from the fifteenth-century, a faerie’s plot and a modern day time-traveling maiden.  What’s not to love in that combination?

Read on for my thoughts on The Highlander’s Folly.  No true spoilers, promise.

This is the third novel in this series, and I was a bit concerned because I have not read the others.  Sometimes you can jump into a series anywhere and others, not so easy.  There were enough comments about previous stories in the early chapters that I could read Hunter and Meghan’s story without feeling I had jumped into the ending.  While not a stand-alone, in my opinion, it didn’t feel like I was lost.

When a Highlander knight crosses paths with a modern day martial arts instructor – well, sparks are going to fly.  Then add into the mix that Meghan is totally unsurprised by the notion of time-travel and you add another level to the story.

I enjoyed the richness of details of the times, conditions and how life is lived day by day.  I’m not so sure that Meghan did though.  It is a major adjustment from taking part in medieval tournaments for fun, and actually living them in a life and death situation.

Hunter is a man of his times, arrogant most of the time, sure that his way is the right way, honorable to a fault.  Even though he has fae blood running through his veins, he is none too pleased to have been tricked by Giselle into bringing Meghan back in time to her past.

It was fun deciphering the two languages used.  Hunter’s local brogue with its meaning, and Meghan’s modern day conversation that often baffled Hunter.  Overall, this was a charming, sexy, enjoyable tale.  Time-travel is always a fascination, and the author handled this aspect of the story extremely well.

The only part of this novel I took a bit of exception to was Hunter’s honor where it came into play where Sky and Meghan were involved.  He knew his intentions toward Sky from the start, he had considered himself betrothed to her from the moment of her birth.  Yet he didn’t mention this to Meghan, even when he was having conflicting emotions about her.  He was falling for the maiden from the future, but he didn’t tell her that he was spoken for.  That bothered me – perhaps it is simply true to the nature of the “medieval beast”, but it put his honor into question in my mind.  Again, in my opinion, perhaps you will see his actions differently.

I enjoyed this novel very much – enough to go searching for the earlier novels in this particular series.  That in itself says it was a very good read for me.

I would recommend this one.  It was face paced, action packed and a passionate love story with a satisfying conclusion.

The Highlander’s Folly is available at Amazon in paperback and on Kindle.