When a magician is after your heart is it a trick?  Or the experience of a lifetime?  Can love thrive in spite of tricks? 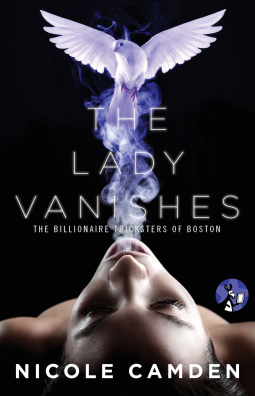 Billionaire tech genius and inventor Milton Shaw never had life easy. Growing up in the foster system, his only escape was into the world of magic, studying Houdini and perfecting the art of sleight of hand. Too smart to fit in, and isolated from his peers, he vowed that one day he would be so powerful that no one could touch him.

Stern doctor Regina Gallows hates nothing more than attention and trickery. In fact, she went into science to feel in control of her world. Yet when her work brings her into contact with the sexy tech superstar Milton Shaw, she finds her body warring with her idealism…and her desires shifting from unlocking the magician’s secrets to unlocking his heart.

*I received an e-ARC of The Lady Vanishes from the publisher and NetGalley in exchange
for an honest review. That does not change what I think of this novel.*

Read on for my thoughts on The Lady Vanishes.  No true spoilers, promise.

Milton Shaw is hot, sexy, a lot kinky and has his mind set on Regina Gallows.  It will take every bit of his magic, his stubbornness and his emotions to finally capture this lady.

Regina Gallows was once the wild, spoiled daughter of a wealthy man, a con man who took off with other people’s wealth.  She avoids being the center of attention.  All she wants is to forget about the past that brought such humiliation along with adult-sized responsibilities and get on with her life now.  She’s a doctor.  She’s pushed down that wild side until it almost no longer exists… almost.

Yes, there is tons of hot sex.  Kinky sex.  Rock someone’s world sex.  But there is also a love story in there, too.

There are two more hot and sexy billionaires to pair off yet in this series.  So if you enjoyed the first novel, my bet is you’ll enjoy the rest of the series.  I know I will.

The Lady Vanishes is available at Amazon on the Kindle.