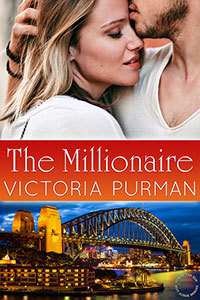 Renowned photographer Chris Malone is fed up with fame and disaster. All he wants is anonymity and a chance to recharge. Suburban journalist Ellie Flannery has other ideas. If she can just convince her long-time idol to support her favorite cause, she knows her fund-raiser will be a huge success.

After refusing at first, Chris decides to co-operate. When he’s forced to defend his own reputation as well as his family’s, he decides he wants something from the idealistic and sexy-but-doesn’t-know-it Ms Flannery Ellie in return: her heart.

But Ellie has scars that no one has ever seen, and she doesn’t want to open herself up to anyone, much less a man with such an unflinching eye for the truth. Can Chris convince her to strip herself bare, in more ways than one?

Read on for my thoughts on The Millionaire.  No true spoilers, promise.

Scars don’t always show on the outside.  It doesn’t mean that they are any less felt for not being seen.

Chris Malone’s photographs showed the world the faces of hunger, the ravages of war, the senselessness of human nature at its worst.  He was tired, no actually he was bone weary of it all and simply wanted a few weeks’ break from the ugliness of the world he photographed for the news headlines.  He just wanted peace.

Ellie Flannery was a reporter by trade, but a fundraiser by heartfelt passion.  She worked tirelessly on her current fundraising efforts which would benefit the organization that had in effect saved her grandfather’s life.  One donated photograph by Chris Malone would raise thousands for that cause.  Unfortunately for Ellie, her request when she encountered Chris on a deserted beach came off as more of a stalker than anything else.  And Chris turned her down flat and rudely.  If she had been able to get her thoughts together and put aside her admiration for the photographer she might have gotten out the right words to explain her request.. but she didn’t and misunderstandings were the unwanted result.

The rest of the story unfolds as these two people with scars both seen and unseen, work past misunderstandings toward something more precious than either had ever hoped to find.

I completely enjoyed The Millionaire and would recommend it without hesitation.  It is a short but powerful story of two people who feel deeply, trust slowly and must find enough courage to push past the insecurities to discover a once in a lifetime kind of love

It gets a 4 outta 5 rating from me.  I’m convinced you’ll enjoy this one as well.

*I received an e-ARC of The Millionaire from Tule Publishing and NetGalley in exchange for an honest review. That does not change what I think of this novel.*

The Millionaire is available for the Kindle at Amazon