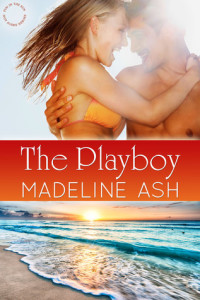 Innocent Alexia Burton needs to become sexually confident for an upcoming acting role, and that means taking a lover.

Someone she’s attracted to. Someone who’ll teach her what she needs to know, but not ask for more than she’s prepared to give. She needs to learn the intensity of true desire and then have him walk away.

Parker Hargreaves is determined to make amends for treating Alexia badly all those years ago. He’s changed and wants her to think better of him. If that means letting her sharpen her sexual moves on him, so be it. He’ll do it. His playboy reputation certainly won’t suffer.

He just doesn’t count on walking away being so hard.

Read on for my thoughts on The Playboy.  No true spoilers, honest.

If only we could go back and fix our teenage selves – most of us have made some pretty nasty impressions and mistakes in our teens.  Parker was no exception.  His wealth, his good looks, his worship me just because attitude, his arrogance all played a part into the teenager he was.  The boy who, with a few brief words could shatter another teenager’s confidence..

Alexia had moved on from those teenage memories.  She had left home to head to the bright lights of Los Angeles and a career that put her in front of the cameras.  After a long ongoing television series filmed its last season, Alekia started taking auditions for her next role.  A movie role that she was told was written for her – but not the passionless woman she was right now.  This role called for a sensuous, sexy, secure in her own attractiveness woman – one who knew her way around a bedroom and a bed… and that wasn’t Alexia.

Time and life experiences change all people eventually.  Parker certainly had grown up and looked back on his teenage self with many regrets mostly about Alexia.  Now she was back home – for research for a role.  Maybe there are second chances or at least the possibility to make amends.

I enjoyed The Playboy – more than I expected to at first. This was a charming story of two people who had a point in their past that had to be dealt with and gotten past before anything, even friendship, could begin.  I liked that Alexia gave Parker a hard time at first, maybe even drew it out a bit too long.  He had been a colossal jerk.  But wasn’t she doing the exact same thing years later – in the name of research?

Their love story, their mutual seduction takes up the novel and it was certainly a slow burn.  I would gladly recommend The Playboy to anyone who wants a love story that redeems the past and makes it even better.  This one got a 4 outta 5 rating from me.

*I received an e-ARC of The Playboy from the publisher,Tule Publishing and NetGalley in exchange for an honest review. That does not change what I think of this novel.*

The Playboy can be found at Amazon for the Kindle.

« Review: What A Bachelor Needs by Kelly Hunter
Review: The Millionaire by Victoria Purman »

2 responses to “Review: The Playboy by Madeline Ash”