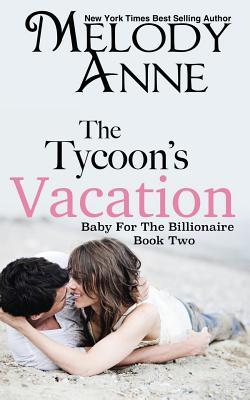 Drew Titan decides it is time to take a vacation at one of his exotic resorts, and ends up literally running into Trinity Mathews while he is surfing. They end up having a steamy romance over the week long vacation, until she finds out he is the resorts owner, and had lied to her. She has sworn off all business men, since she couldn’t seem to find one who knew how to remain faithful to her, which is what landed her at the resort in the first place.

She goes back home to discover that her first impulsive thing she has done in her life has left her pregnant and alone, that is until Drew finds her and will not go away until she agrees to marry him.

Come enjoy the adventures Drew and Trinity take together in this fun filled story that has love, passion, fighting, and making up. Drew’s cousins Derek and Ryan add humor and even more love to the adventure, and will leave you wanting a hunk of your own.

Read on for my thoughts on The Tycoon’s Vacation.  No true spoilers, promise.

Trinity had had it with men.  Especially wealthy businessmen.  After wasting her time on a loser who she caught in the sheets of his own bed – with his secretary, she simply wanted to escape and not think about the male half of the species.  So totally non-impulsive Trinity withdrew money from savings and booked herself into the most exotic, expensive vacation getaway that she could find.  Never thinking that she was headed right into the life of the most handsome, fun-loving, sexy, wealthy businessman she ever dreamed of.

Drew needed a vacation.  So where would the wealthy owner of several exclusive, beautiful resorts head to when he needed to get away – one of his own resorts where he could relax, tell his staff that he wasn’t there officially and maybe hit the waves.  His cousin Derek had just reunited with his long lost love, Jasmine and their adorable son Jacob plus their precious newborn Britney.  Seeing the man who was as close to Drew as a brother finally happy and content gave Drew a lot to think about.  Maybe he needed time off, maybe he was longing for what Derek and Jasmine had – but even all of his money couldn’t just order up the perfect mate.

The waves weren’t cooperating today, so Drew headed out further, the last thing he expected was to feel a bump against his board – and to see a woman sinking beneath the waves.  Trinity had decided to go for a swim in the beautiful waters surrounding the amazing resort she had booked herself into for a week.  But when she surfaced, she realized she had gone further out than she intended.  Not really scared, but tiring she put her head down and swam determinedly for the shore – she never saw the board that hit her on the side of her head, and she knew nothing as she started to drop down into the ocean.

So begins the steamy, charming, often funny and loving relationship between Drew and Trinity.  Trinity wants nothing to do with Drew after discovering that the resort employee he had pretended to be was nothing but a lie.  Drew intended to tell her who he was, but his deception was discovered before he could explain why he had let her think he wasn’t a wealthy businessman.  Now with a baby on the way, these two need to find a way to come together for the sake of their child.  It’s not going to be easy, but it will be intense, funny and frustrating.

I completely enjoyed The Tycoon’s Vacation.  The Titan cousins and their ladies create such a fun family.  They all have their own unique quirks, stubbornness and yes, the male attitude of they know what is best in all things.  But at the heart, these are the kind of men that dreams are made of, and I loved every moment spent with them.  If you enjoy a really good love story that feels real (in spite of the men involved being billionaires) then I would strongly recommend picking up this series and emerging yourself in a love feast that will stay with you beyond the final page.