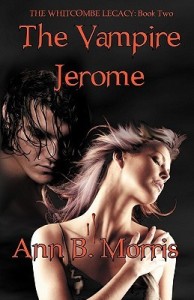 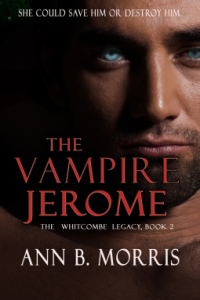 This is the cover for the reissue due out on March 31, 2015.  The cover on the previous page is from the original issue in September, 2010.  I’ve included them both in case you have read this novel after it’s initial, original release.  (I hate to read or buy novels that I’ve read once upon a time – only to discover that the money I just spent on a novel was wasted since the original is in my bookcase.  *sigh*)

There is a reason why we should not judge a book by it’s cover, or a series by it’s introductory novel.  While the first novel in The Whitcombe Legacy did nothing for me at all, the second was a very good story.  I cannot tell you why that is, I read them back to back – but Jerome’s and Thea’s (Dottie’s) story had more of a connection for me.

You can read the general outline of the story from the synopsis, what you won’t get are the strong feelings in this novel.  Jerome has no desire whatsoever to give up his vampire life.  None.  And he will fight against the prophecy for as long as he possibly can.  He is rude, sarcastic, brazen and a general all around bad boy.  With absolutely no intention of changing his ways.

When agreeing to his brother’s plan to bring Dottie (Dorothea) out to him in San Francisco for her safety, he reluctantly made up his mind to accept this human staying in his home.  What he didn’t expect was to feel an overwhelming attraction to a beautiful woman who had just endured a living nightmare.  So Jerome did what he does best – bring out the sarcastic, bad boy.

Dottie was experiencing sudden sleep, a side effect from her nightmare back in captivity in New Orleans.  She would suddenly just drop off to sleep, leaving her vulnerable and afraid.  Her step sister,, Simone and her future husband Julian, seemed to think that she would be safe here with Jerome and that the doctor they recommended would be able to help her heal.  She didn’t expect to be attracted to a vampire, especially after what she had been subjected to by an evil one… but still, Jerome did touch a part of her heart that she had thought closed off.

The Vampire Jerome continues the story of the triplets and their battle against the evil that most humans have no clue exists.  I enjoyed the second novel in the series and plan to pick up Jonah’s story.  I’d give this one a solid 3 outta 5 on my rating scales.  Paranormal romance readers will love this one.

My rating:  3 outta 5 = a good novel, enjoyed it and would recommend it

*I received an e-ARC of The Vampire Jerome from the publisher and NetGalley in exchange for an honest review. That does not change what I think of this novel.*