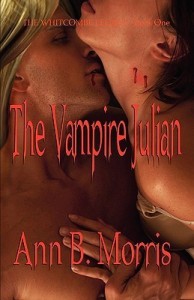 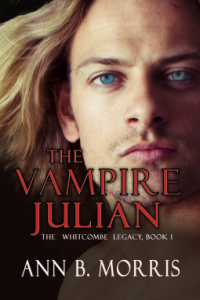 This is the cover for the reissue due out on March 31, 2015.  The cover on the previous page is from the original issue in June of 2008.  I’ve included them both in case you have read this novel after it’s initial, original release.  (I hate to read or buy novels that I’ve read once upon a time – only to discover that the money I just spent on a novel was wasted since the original is in my bookcase.  *sigh*)

This is going to be more of an opinion review.  I really wanted to enjoy this novel.  The idea of the novel, the synopsis of the book gives it a feel of a book right up my dark alley.

Don’t get me wrong.  The novel was good.  It just could have been (IN MY OPINION) so much more.  And it wasn’t.  So while I didn’t “Love” The Vampire Julian… you might.  I can only say you’d have to read it for yourself to know.  Don’t take my review as gospel, just because I wasn’t blown away by this novel does not mean that you might love it.

Having said that, since this is a reissue – I, personally, would go to my local library and see if they have this novel on their shelves or can order it for you before you purchase the entire series.  And I know the publisher will not be happy with that, but I did agree to an honest review with NetGalley.  And honestly, for me this would be a Library book, not a bought book.  If you love it, then by all means purchase it and the next two novels in the series.

Folks, I don’t like to give this kind of review.  I can usually find something to like about a novel – but The Vampire Julian just wasn’t for me.  And that is my honest (Not Intended to be Hurtful) opinion.

My Rating:  2 outta 5 = it was okay, I mostly enjoyed it but I really would not suggest buying, maybe borrowing from your local library is the best bet.

*I received an e-ARC of The Vampire Julian from the publisher and NetGalley in exchange for an honest review. That does not change what I think of this novel.*

« Review: The Courtesan Duchess by Joanna Shupe
Review: The Vampire Jerome by Ann B. Morris »