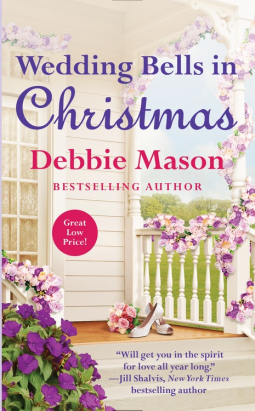 Wedding bells are ringing in the charming town of Christmas, but not for Vivian Westfield. She’s just had her heart trampled under the cowboy boots of Chance McBride and lost her dream job at a big-city newspaper. But when she returns for a wedding, she stumbles on a story that could resurrect her career. First, though, she’ll have to deal with the handsome man standing in her way… and a still-burning flame that’s too hot to ignore.

Chance recognizes trouble when he sees it. He just didn’t expect to find it in the first-class cabin on the flight home for his father’s wedding. Yet there she is, as gorgeous as ever. Vivi dared Chance to want things he knew he could never have. It’s why he left her. But Christmas’s meddling matchmakers have them firmly in their sights. So if they want to survive the next week, they’ll have to play the part of an adoring couple—an irresistible charade that may give them a second chance at the real thing.

Read on for my thoughts on Wedding Bells in Christmas.  No true spoilers, promise.

Vivian and Chance have a history.  At one time, Vivi thought they’d have more, but Chance proved her wrong on that score.  She’d lost the man she loved, the job she loved and found herself on the lovelorn advice column in the newspaper – not the high crime beat that she had once been on.  Okay, maybe she got a bit carried away, perhaps even a bit careless of her own and others’ safety when tracking down leads on her story – but that was no reason to demote her to Letters to Vivi.  She had her own heartache, and her kick butt approach should not have worked for the column – but it did, big time.  Not the career choice she’d wanted.  Now she was headed back to Christmas, Colorado for a wedding.  The last place she wanted to be, hopefully Chance wouldn’t be there either – even if it was his father who was getting hitched.

In the midst of a snow storm, Chance’s life tumbled.  His wife and their unborn daughter were killed in a car accident on the snow covered road.  He was convinced that the call she had received shortly before the wreck had been related to a case he was working – and he blamed himself for their deaths.  He had run into Vivi when he was working undercover and they had had an amazing week together.  But his heart was buried with his wife and he left with little more than a terse note when another assignment came in.  Regret?  Sure, he had tons of regrets.  Vivi was a fascinating woman, sexy, intelligent, headstrong, stubborn and she fit just perfectly next to him.  But she wasn’t Kate and he never intended to give his heart again.  It was too hard to pick up the pieces when that heart got ripped into tiny pieces, he knew from firsthand experience and he was never going there again.

Too bad one particular matchmaker from Christmas had other ideas for these two.

Wedding Bells in Christmas has so many branches to the story of Vivi and Chance it was fascinating and fun to watch them all merge together and create a slice of small town America.  This is the fourth novel in the Christmas, Colorado series.  All of the characters of the first books make an appearance, and perhaps a couple from future books as well.

I completely enjoyed visiting Christmas again.  This novel is full of rich, full flavored characters with a storyline that never lets up but keeps you turning page after page to discover what happens next.  I grew up in a small town, and yes the townsfolk and neighbors do know just about everything about everyone.  There are truly few secrets in a small town.  Yet some have been kept for over five years, and now they are about to cause trouble for a lot of people.

I adored Vivi and Chance.  Opposites in many ways, but they complimented each other – they were two halves that made a whole.  If only Chance would give them the chance they needed to be happy.  Wedding Bells in Christmas is a love story, a suspense story and a second chance at love story.  It won’t be easy, but then anything worth having usually isn’t – but through all the matchmaking, heartache, laughter and family this is an enjoyable journey to an everlasting love.  It’s just going to be a bumpy ride to get there.  But it is well worth your time to follow along on their journey.  I would definitely recommend this story to anyone who wants an intense, involved story that brings in the entire town for the celebration of two people falling in love.

*I received an e-ARC of Wedding Bells in Christmas from the publisher and NetGalley in exchange for an honest review. That does not change what I think of this novel.*

Wedding Bells in Christmas is available in paperback, audio and for the Kindle