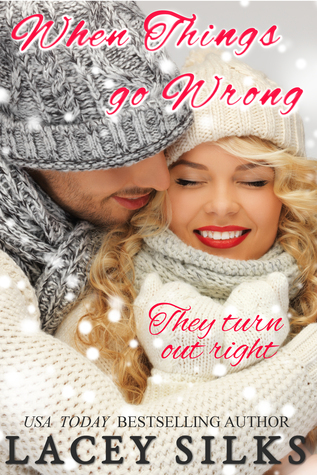 Lazy eyes, scarred lip and brow, muscled and tattooed, Julia’s high school best friend, the one who made her heart go pitter-patter, had definitely changed in the past five years she hadn’t seen him.

Being stuck with her mom and boyfriend number one hundred at an exclusive ski resort doesn’t seem as daunting when Julia runs into the gorgeous and enticing Scar Wagner. And when fate forces the couple much closer than Julia would ever allow a man to be, she can’t help but wonder whether it’s time to give relationships another try.

After all, when things go wrong, they turn out right.

Read on for  my thoughts on When Things Go Wrong.  No true spoilers, promise.

When Things Go Wrong was a delightful, sexy and very short read.  Since it is the prequel introduction to Ms. Silks’ next story, Cheaters Anonymous, I’m not really surprised by the length.

The story is pretty much laid out in the synopsis so there really isn’t much more to tell.  Except – can we say “Holy Hot Almost Sex, Batman!”  🙂  At least I now know one way to survive an avalanche.  The last time Jules and Scar saw each other was in high school, after this weekend it will be another 6 years before their paths cross again.  Fortunately for us, the readers, it will only be until April, 2015 until we can read their reunion story.

We meet, or at least are aware of, Nick’s (Scar’s) brothers, Jules’ sister Zoey, and Sid and Mom.  I’m going to take a guess that they all will have at least a passing mention in the next novel…I already know that it’s Nick and Jules who will be the stars.

I enjoyed this prequel and it did the job it was intended to do – I will definitely be looking for Cheaters Anonymous come April of 2015.

While on the milder side, this would also be considered Erotica as well as Contemporary Romance.  Go download this short read and enjoy.

My Ratings:  4 outta 5 = a really, excellent novel that was great just didn’t go beyond.

*I received an e-ARC of When Things Go Wrong from the publisher and NetGalley in exchange for an honest review. That does not change what I think of this novel.*

This novella is available at Amazon for the Kindle.