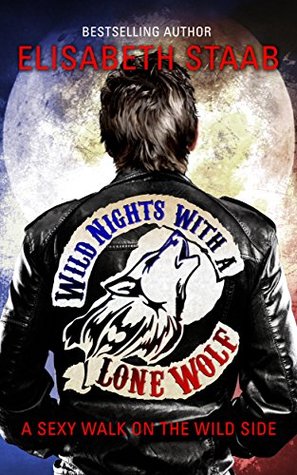 Agent Sherri Walker needs a change of scenery. Her former lover nearly tanked her career, forcing her to take a leave of absence. A few drinks and a one-night stand with a sinfully hot stranger look like a great way to take her mind off her troubles, until that stranger’s past lands her in a new world of danger.

Asher Hughes left his outlaw pack but couldn’t ditch the bad blood. A lone wolf who’s always refused to bond, Ash is left wanting more after one night with a beautiful, spirited human. Worse, it puts Sherri in the crosshairs of an old pack enemy, and the only way to save her is to claim her as his own.

Read on for my thoughts on Wild Nights with a Lone Wolf.  No true spoilers, promise.

To say that Sherri’s life, both professionally and personally, had gone to hell in a handbasket recently would be an understatement.  After the betrayal of her now thankfully former boyfriend and the mess he created for her at work, Sherri has been demoted, relocated and is now on an enforced “vacation” before taking up her new duties.  She figures she’s lucky to still even have a career, but damn, how could she have been so blindsided.

Shifters are not unknown in this world building.  Perhaps not a well known fact, instead of myth, still the wolves are a natural part of this world.  While many people still make the occasional snide remark, or really in bad taste kind of joke, we find wolf shifters in all aspects of society.

Sherri hasn’t come in contact with a shifter before.  And at first, she didn’t realize that the hot, sexy male who roared up to her hotel on his motorcycle was a shifter.  She just saw a ruggedly handsome guy with an “I’m a bad boy” attitude stride into the hotel lobby and out of sight.

Asher has had enough of his brother messing with his business.  Tonight he’s confronted Jojo at the hotel bar where he’s working.  After a heated argument with some serious chest thumping, Ash notices that no one in the bar is really paying attention to the fight with his brother … except that beauty at a table for one, who is obviously reaching for a gun that’s not where it’s supposed to be, watching the confrontation from across the bar.

Sherri keeps a concerned eye on the obvious fight going on between the handsome stranger and the small, irritating man behind the bar.  While her first instinct to protect and serve halted when she realized she wasn’t carrying her weapon, she still kept a close watch on the situation.  To her surprise once the fight ended, the sexy aggressor walked straight across the bar and sat down across from her.

Ash didn’t do relationships.  Hell, he didn’t do second dates.  But this woman pulled at him and if she was up for it, he’d gladly spend some serious sexual time with the fearless lady.  Sherri didn’t do one night stands.  But for this man she would rethink that rule.  She was off duty, totally messed up and for once a night of hot, intense sex with a stranger wasn’t a bad idea at all.

Wild Nights with a Lone Wolf was a completely hot, sexy, intense and enjoyable read.  While a relatively short story, it packed a punch with characters that jumped off the pages.  I loved Ash.  A kick ass, take care of business kind of man, he took himself out of his pack when he disagreed with his father’s tendency to go along with his younger brother’s illegal activities.  Ash and his brother Jett stepped away from the pack, but that certainly didn’t take them away from pack troubles.

The sexual attraction was hot between Sherri and Ash.  And even though it started as a one night of sex , it wasn’t farfetched to me when they continued working the obvious attraction.

I enjoyed this novella and look forward to finishing the storyline in the next one.  There are more stories to tell with the other characters introduced in this one, and their tales should be just as intense as this first couple.  If you’re a shifter fan, love paranormal romance and absolutely pant over a hot, sexy alpha male claiming his mate – this one is for you.  Go for it.

*I received an e-ARC of Wild Nights with a Lone Wolf from the publisher and NetGalley in exchange for an honest review. That does not change what I think of this novel.*

« Blog Ahead Mini-Event
Review: Her Secret Prince by Madeline Ash »