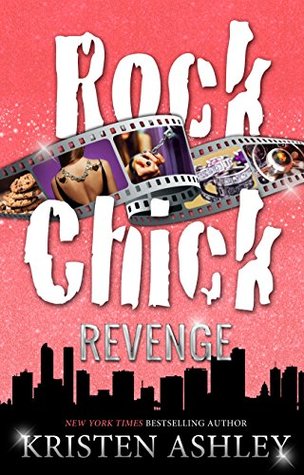 Ava hates men, she has a reason and she’s vowed not only never to get involved with another one again but also to exact vengeance on her best friend’s, lying, cheating husband. Since Luke, Ava’s childhood crush is now a private investigator, she thinks to enlist him but changes her mind at the last second.

Too late, Luke knows she’s up to something and he’s already seen many a Rock Chick try to fight her own battles without the Hot Bunch stepping in. He’s having none of it. She’s having none of him. The clash of the Rock Chick and Hot Guy begins but Luke’s got the advantage. He has handcuffs and he’s not afraid to use them.

I seem to be in a Rock Chick re-reading binge at the moment, but that’s okay, anytime I can head back to Denver to spend time with the Rock Chicks and the Hot Bunch is a good day indeed.  I like to think that I love this series equally – but Ava and Luke hold a special spot simply because of their personalities.  Both are as stubborn as mules, neither likes to give in for any reason, and together Ava and Luke are simply adorable, sexy, and provide so many laugh out loud moments throughout their story.

Ava has gotten herself in deep trouble and her instinct is to turn to her childhood crush, a man who she’s been in love with for years even if she won’t admit that to him or herself.  Yet she almost backs out of making contact, fortunately for her (and for us) Luke shows up and stops that nonsense quickly.  I “got” Ava, she sees herself through the eyes of people in her past – what she cannot see is the woman she is today.  And Luke claimed her as his long, long ago but time and circumstances kept them apart until now.  And now is really all that matters.

Rock Chick Revenge is full of sexy, sizzling chemistry, danger, laughter, girl power friendships, nasty villains, a fantastic secondary cast who feel like old friends, and hot, handsome, determined men.  I will admit there were times when I cried real tears while reading Ava and Luke’s love story.  What they’ve both gone through together and apart would break lesser people but not them.  I love this series, adore the cast of characters who are always in each other’s stories and we keep branching out to include even more.  If you haven’t discovered this world I would highly recommend you get started with the first in the series for the stories do build on past events in many ways.

I own a Kindle edition of Rock Chick Revenge.