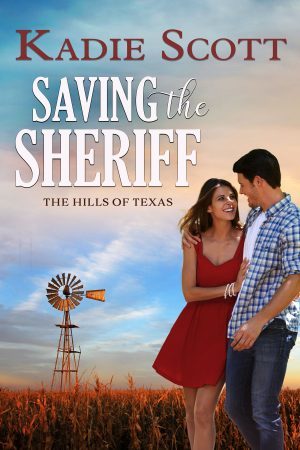 There are times in life when we are so focused and caught up in the past that we cannot see beyond to a future without unnecessary complications brought about by that same past.  Cash will not let go of the past, and by doing that so stubbornly he’s forfeiting his future.  Holly left town with good reason, and she’s returned to not only look after her deceased friend’s daughter but to bring the truth to people who need to hear it.  The trouble with being the truth bearer is that it often paints you as the enemy when in fact the opposite is true.

I enjoyed Saving the Sheriff, it shows how often we simply fall into a pattern, holding tight to the past when we need to let go and move on.  That’s not always easy to do, but it’s necessary for every person at some point in their lives.  Holly and Cash were right for each other they simply (or maybe not so simple) needed to get past what was and head into what could be.  Look for one little sweetheart of a daughter to steal lots of scenes.

There is some light world building, as I would expect from the first of a series but it was far from overwhelming.  I’d recommend Saving the Sheriff to any Romance reader who enjoys complex issues, a good story and people you’ll like and relate to.