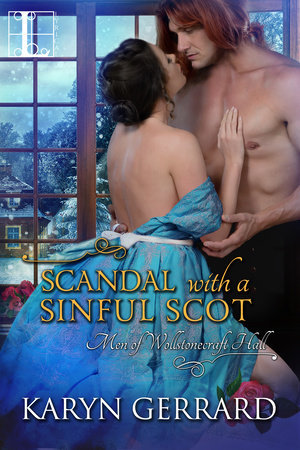 Falling in love was the darkest moment of Garrett Wollstonecraft’s privileged youth, even as he and Abigail Hughes shared a blissful summer of passionate promise. Sworn to keep Abigail safe from the curse plaguing generations of Wollstonecraft men, Garrett sacrificed his future happiness. Now, fourteen years after he lost his heart, Abigail reenters his life. But the woman who arrives unannounced at his ancestral manor is very different from the sheltered girl Garrett once knew.

The widow of a country doctor, Abigail can’t forgive Garrett for his cruel rejection. Yet she can no longer keep the truth from him—a secret that could have resulted in her ruin. But as the embers of desire reignite, and Abigail and Garrett slowly rebuild trust, a malicious enemy plots against them. Is their love strong enough to break free from the sins of the past—and to end the tragic cycle that consigns Garrett to a life of loneliness?

Titles in the Men of Wollstonecraft series include:  Marriage with a Proper Stranger – Scandal with a Sinful Scot – Love with a Notorious Rake –

It’s easy and heartbreaking to understand Abbie’s reactions when the man she’d love forever turned away from her.  In his view Garrett was saving Abbie from his family’s curse, one that always resulted in the death of any man’s wife who would dare to challenge the curse by falling in love.  He would rather face a loveless life than risk Abbie.  To Abbie, Garrett’s family misfortunes was exactly that, people get ill, women die in childbirth it is a way of life for the time they lived in.  His rejection of their love and of her sent Abbie on a path that she would not have willingly chosen.  Now, years later her resentment, her anger and yes, the deep hurt finally can be acknowledged to the man who caused her dreams to die.  There shouldn’t have still been a spark between them, the love that Abbie was certain had died long ago is renewed in Garrett’s presence.  Now the secret that she’s held onto for so many years must be reveled.  A second chance at the love of a lifetime is at risk, their happy ending will come only when Abbie lets go of the past and Garrett stops believing in a family curse.

Scandal with a Sinful Scot adds some twists and turns to a situation that often happens, no matter the time period.  One vile villain will add to the tensions and the danger that this couple must face to finally experience all that they could have been.  I hurt for both Abbie and Garrett for different reasons.  They are a couple that fits, and even a noble gesture is meaningless when nothing but heartache results from it.  I enjoyed  my time in the world of the Men of Wollstonecraft Hall series, and if you enjoy Historical Romance then this is one that should be on your reading list.