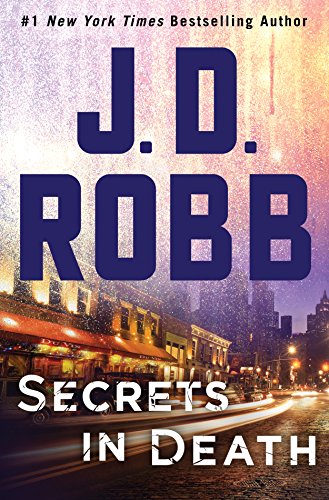 The chic Manhattan nightspot Du Vin is not the kind of place Eve Dallas would usually patronize, and it’s not the kind of bar where a lot of blood gets spilled. But that’s exactly what happens one cold February evening.

The mortally wounded woman is Larinda Mars, a self-described “social information reporter,” or as most people would call it, a professional gossip. As it turns out, she was keeping the most shocking stories quiet, for profitable use in her side business as a blackmailer. Setting her sights on rich, prominent marks, she’d find out what they most wanted to keep hidden and then bleed them dry. Now someone’s done the same to her, literally—with a knife to the brachial artery.

Eve didn’t like Larinda Mars. But she likes murder even less. To find justice for this victim, she’ll have to plunge into the dirty little secrets of all the people Larinda Mars victimized herself. But along the way, she may be exposed to some information she really didn’t want to know…

A complete list of the in Death series, and novellas in anthologies can be found on the J.D. Robb page.

Secrets in Death has a slightly less intense feel to this story.  There is still murder most foul, committed practically next to Lt. Eve Dallas.  Certainly the killer hadn’t expected the city’s top murder cop to be at the scene where they would end a most vicious, nasty woman’s life.  Eve would stand for Larinda Mars, no matter how evil she herself was in life, but in death she was now Eve’s to find justice for, no matter what secrets the dead revealed.

In many ways this 45th story in the in Death series gives us a murder puzzle to solve, it also gives us a current look into the lives of several of our favorite characters from the series.  One of the reasons I love this series so much is the growth that each and every character has gone through over the length of this series (and hopefully far into the future).  There is far more of Eve and Roarke together in this one, more of the growth of their relationship.  It’s so easy to see their intense love for each other, and how they have each other’s backs even when holding onto their own thoughts and maybe secrets in protection of each other.  It’s always a special book when we get more of their relationship, and how the others in their lives are doing their own growing and changing as well.  I love the high intensity crime ones, but also love the calmer dig for the truth ones, but gives us more of our main characters who have become like extended family after all this time together.

No spoilers here, I don’t intend to talk much about the plot for fear of giving away hints that should be read firsthand   I will say that I enjoyed Secrets in Death immensely, loved the feel of having more in private relationship time with Roarke and Eve, and truly liked the interaction between all of my favorites.  Oh, there’s still snark, sass, confusion over the meaning of phrases… and a check on the Candy Thief ability to find Eve’s current hiding place.  Another day in the life of the city’s top murder cop  And another excellent story to add to the lore of Eve Dallas, Roarke and crew.

I would highly recommend Secrets in Death, and the entire series to any reader who enjoys mystery, romance, a touch of the future and damned good stories.  You’ll find it all in this series.  I’m really looking forward to Dark in Death coming out in early 2018, the little bits I’ve read about that storyline are simply fascinating.

I own an e-copy of this book.

« Second Chance Cowboy by Joanne Rock
Blame It on the Bet by L.E. Rico »