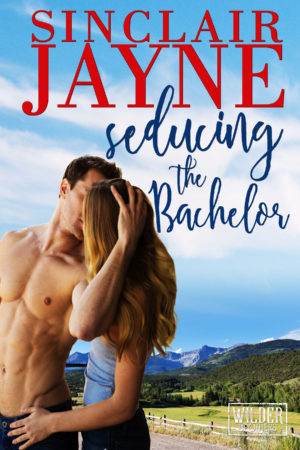 Single mom and veterinary student Talon Reese thinks she is volunteering her time, not her heart or her body, for Marietta Montana’s second annual Bachelor Auction. But when Bachelor number 3 hits the stage, igniting every hormone she forgot she possessed, she’s questioning her vow of no more men. With a man this drool worthy, some fun doesn’t have to be off the table, even if she’s not looking for a relationship.

Special Forces sniper Colt Ewing blew out of Marietta on graduation day and never looked back, until his former football coach asked for his help. Standing on the auction block is a tough mission for Colt until he meets his winning bidder, a woman who’s as warm and friendly as he is aloof and silent. All night her mouth has been creating sexual fantasies, so when she opens it to boldly proposition him, there’s no way in hell he’s going to say no.

But as Colt and Talon burn up the sheets, he begins to forget why he hates this town, and Talon wonders if she can learn to trust enough to fall in love. But will that be enough to convince him to stay?

Titles in this series include:  Seducing The Bachelor – Want Me, Cowboy – The Christmas Challenge (THE WILDER BROTHERS – Tule often has titles in more than one series or grouping… this title is also part of the BACHELOR AUCTION RETURNS series which includes these titles:  Bachelor for Hire by Charlene Sands – Falling for Her Bachelor by Robin Bielman – Seducing the Bachelor by Sinclair Jayne – Weekend with Her Bachelor by Jeannie Moon

Talon and Colt both had difficult childhoods for far different reasons.  Talon was part of the foster care system, but her upbeat personality didn’t let that harsh fact change her.  She kept her sunny disposition and attracted a like minded friend, Jenna, who she remained close with.  When Jenna died, her son Parker was adopted by Talon.  He was her pride and joy… she would, and is doing everything possible to give them both a good life.  If right now that includes several jobs, long hours on her feet, fitting school n and juggling both of their schedules, well so be it – her son was worth everything.

During his younger years Colt lived with his “uncle”, a drunk, abusive man who prompted Colt to spend as much time away from the ranch as possible.  Football was one way during his high school days to be someone else.  And the moment he could, he signed up with a recruiter and hightailed it out of Marietta for good.  He became a highly skilled military man, contained and deadly, and never ever looked back.  Until the Coach asked him and some other former players to take part in a charity Bachelor Auction to benefit the local hospital in building a helipad which could save lives.  Talon was working at Grey’s that night – neither knew that simple bachelor auction would change their lives forever.

There are people who touch some part of us, for whatever reason, and we simply cannot walk away – even when every instinct tells us to.  Colt makes a discovery, early on, about this lovely lady who he’d had an instant attraction to, and who her friends had “bought” him for during the auction.  How would he handle knowing she’d spent months living at the ranch, nursing an ailing man who showed such different sides to Colt or Talon and Parker.  She was difficult to resist, and truth to tell, he didn’t try hard to walk away.  This was temporary, he’d only be in town one month to wrap up his uncle’s affairs – then he had the decision to make of signing up again or finding out what life offered him outside of the military.  He wasn’t a forever kind of guy, he didn’t know how to be – Talon and Parker deserved better than him… but they would disagree.

Talon and Colt’s romance is deeply emotional, hitting on subjects that are realistic and completely believable.  They have decisions to make, choices that could bring them happiness forever or just a short time.  Seducing The Bachelor also sets up the beginning of The Wilder Brothers series.  There are still questions that were left unanswered, hints at deeper secrets yet to be revealed.  As a set up story, it worked very well as now we need to know what is happening next.

I enjoyed this story very much, as well as both series.  If you’re looking for a believable couple in situations that are completely relatable – then this story, and these series should be on your reading lists.  I would recommend Seducing The Bachelor without hesitation.

« NetGalley Wrap Up For 2016
The Montana Bride by Jeannie Watt »