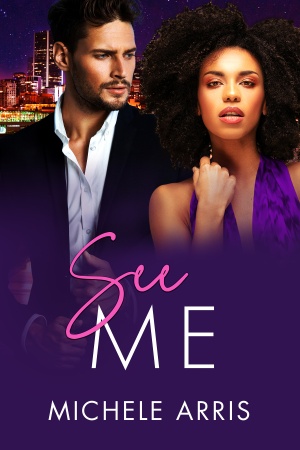 She believes in family…

Ever since Kennedi Chase was a little girl, she dreamed of one day owning her mother’s bakery boutique, Chase Confections. Now that she does, she’ll do everything she can to keep it running. When a hotshot businessman—emphasis on hot—threatens everything she holds dear, Kennedi bakes up an unconventional plan to protect her family legacy.

He believes in himself…

Casio developer Trenton Shaw will do anything to succeed. After a bitter divorce, he’s poured his heart and soul into achieving his professional goals. A new parking garage on the Washington D.C. Wharf is essential to his casino. He won’t let a cake baker get in his way, no matter how gorgeous, tenacious, and irresistibly charming she seems to be.

There’s no denying the sizzling attraction as professional entanglements become highly personal. But when Trenton discovers Kennedi’s secret, she’s forced into a desperate choice. Should she protect her family or her heart?

‘See Me‘ begins the ‘Tycoon’s Temptation‘ series with an emotional, sizzling romance that you might mistake for enemies to lovers, at first… no, these two may be on opposite sides but the attraction is too hot for enemies.

I liked them both for different reasons.  Kennedi will do anything she needs to do to protect what is hers or her family.  No one is taking Chase Confections from her, not even a hot developer who thinks he’s calling the shots.

Trenton has been wearing emotional blindfolders since his divorce, all he sees now is the single-minded pursuit of his end goal… that space on the wharf for his casino’s parking garage.  He wasn’t expecting Kennedi or his intense attraction to her.  Neither was expecting to fall or to have to make changes to their own plans that could derail everything between them.

‘See Me‘ easily caught me up in this world with believable, realist characters, smooth writing, and a plot that kept me engaged and wondering what would come next.  Secondary characters matter to me, so I enjoyed the people we met… I’ve no clue if we’ll meet them again later in the series but I’ll be watching just in case.  In all, I had a good, entertaining time in the first story of the ‘Tycoon’s Temptation‘ series and will definitely pick up the next one.