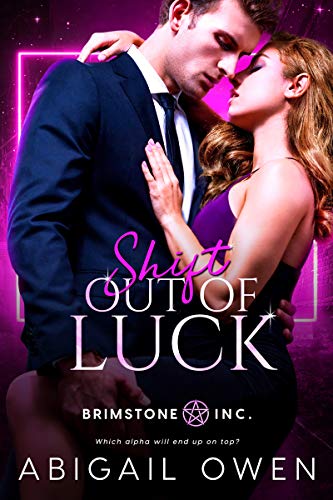 Shift Out of Luck is the second story in the Brimstone, Inc. series with characters and plot that pack a definite punch.  I love when novellas (or shorter stories) deliver what feels like the full story for that couple, and Marrok’s and Tala’s fiery romance certainly did that… and more.  We got a quick look at this couple in Castor’s and Lyleia’s story, The Demigod Complex.  (and they will return the favor with an appearance here)  In fact, I went back and purchased that first story before continuing with this one – and the extra effort was well worth the time because both stories, read in order have given me a better feel for this world.

Both are Alphas of their feuding packs.  One established and secure in his position, the other newer to the role of Alpha, struggling a bit with her pack but nonetheless powerful in her own right.  To bring the feud to an end, a marriage of convenience seems the only solution for Marrok and Tala.  Only time will tell, and perhaps a prophecy comes true as time moves on… or an enemy makes a far different outcome to the situation.  They came together to end a feud, to bring peace to their packs – they didn’t expect the fiery connection between them or the power they both have when used together as one voice.  Neither expected to find that elusive fated mate in an arranged marriage – fate might have been there all along.

I love a kick-butt and take names heroine.  Tala is definitely that.  Oh, she might be on the journey to finding her own strengths, her own place in this new situation but she will not back down, will not sit idly by when danger approaches.  Marrok might think he has the upper hand – he would be very, very wrong.

I also love a hero who knows when to take a step back from being the one in charge.  Marrok becomes that as he sees Tala’s strengths and begins to care for her on a personal not pack level.  Individually they are both strong and stubborn – together they are a powerhouse couple and watching that union become so much more than a marriage of (in)convenience was pure delight.

You’ll find laughter, annoyance, sizzling hot chemistry and a couple to really root for as they work for their happy ending in Shift Out of Luck.  And, even in the paranormal world, working on a relationship is a huge part of its success.  Tala and Marrok will work to make their love last and it will be the best decision of their lives.  I had a blast and would definitely recommend this story and the series.