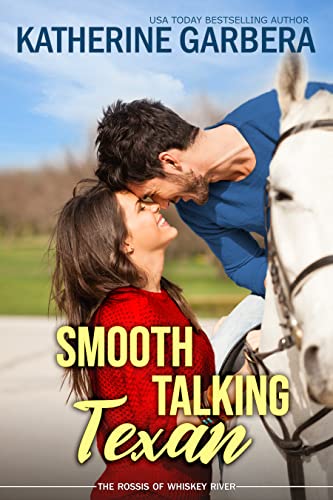 Smooth Talking Texan is the second title in The Rossis of Whiskey River series, and this fake relationship romance had my emotions all over the map!  Rodeo clown, Oliver, is facing his mother’s matchmaking again, especially with all the fuss about his brother’s upcoming wedding.  Oliver is most definitely relationship-phobic, as he doesn’t trust that someone could actually love him, love him enough to stay, to take him just as he is, warts and all.  So, Ollie avoids anything that even hints of commitment… but now he’s going to ask his best friend, barrel rider, Colby, to be his fake fiancée during all these wedding plans, and maybe to keep his mama from tossing any single female in his path as well.

But Oliver doesn’t have all the facts before talking to Colby because she’s been in love with this elusive man for some time now, and asking her to be his pretend fiancée is both a dream come true and a nightmare unfolding.  She believes that with time spent in each other’s company outside of the rodeo that maybe, fingers crossed, Ollie might see that they’re perfect for each other and love her as far more than besties.  Be careful what you wish for, you might just get it… in unexpected ways.

I loved Smooth Talking Texan in so many ways.  I have an attraction to stubborn characters, I don’t know why but watching someone who is as stubborn as a mule in front of a feed bag and not willing to move an inch gives me a chuckle, some time spent shaking my head in both agreement and exasperation, and waiting for them to come to their senses.  I understood Oliver, yet I so wanted him to stop and take a good look at the woman at his side.  This is love, if only he could really see and trust in Colby’s declarations of everlasting love.  They’ll have a bumpy road to their happy ending but it is so worth the wait… and the exasperations toward both of them to see Oliver and Colby finally trust in their real, lifetime love for each other.

I had fun back in this world and I’m looking forward to the next story, a Christmas-themed tale, Christmas with the Texas Billionaire.