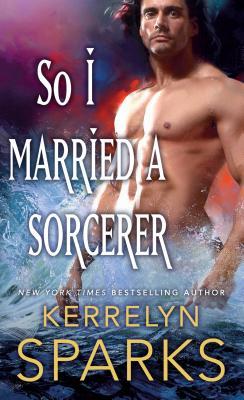 Growing up on the Isle of Moon, Brigitta knows nothing of her past, except that she is Embraced: born with powers that forced her into hiding. Everything changes when she learns she’s a princess, hidden away from her villainous half-brother who now rules the kingdom. But he knows about Brigitta, and he’ll do anything to get her back. Unless a certain roguish pirate has anything to say about it…

Rupert is both an infamous pirate and a sorcerer with the power to harness the wind. He’s been waiting nineteen years for revenge—and he needs Brigitta to get it. What begins as a kidnapping of the fiery beauty turns into a fierce attraction. But can he win the captive princess’s heart?

So I Married A Sorcerer once again returns us to the new magical, mystical world that Kerrelyn Sparks has so lovingly and creatively conjured for us all.  I was caught up in Brigitta and Rupert’s stories quite easily.  Brigitta knows that Rupert is her future even if he isn’t exactly what he’s portraying himself as.  They both have secrets, now they need to find the love and trust in each other to set those secrets free.

Hidden identities, unknown magic, vile enemies, and the love of family will all play a part in this couple’s romance.  If you love Paranormal Romance or even Urban Fantasy I believe you’d get easily caught up in So I Married A Sorcerer.  It’s a spellbinding tale of revenge, losses and finding the one person who could make everything in your world right again for far different reasons than you thought.  I fell in love with this world and reluctantly leave it behind until the next story will draw me back in.

If you’ve read Kerrelyn Sparks’ work before then you know you’re going to find vivid scenes, detailed magic and people to either violently hate or comfortably love.  I’d recommend this story or the entire series to any reader who loves finding themselves involved in magic, chaos and love… especially the love part.  Indulge yourself and enjoy.