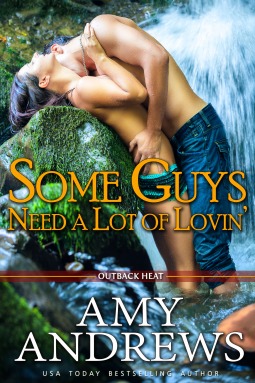 Paramedic Marcus Weston is losing it. The loveable larrikin of Jumbuck Springs is battling PTSD after a horrific incident during recent bushfires. He thought he had a handle on it but not even boozing, partying and wild women are helping this Casanova get outside his head anymore.

Psychologist Juanita Slattery is looking for a sexy distraction. The long, tall stranger in a pair of Wranglers with his big old flirty smile and rugged country looks is just the ticket. And he doesn’t disappoint as they burn up the sheets together in an unforgettable one night stand.

Fast forward a few days and they come face-to-face again. But this time Juanita is in Jumbuck Springs as part of the post-fire counselling team and Marcus is sitting on the other side of her desk. He just wants to get back to work. She knows he needs help. Professional boundaries dictate that they keep their distance, but intense physical attraction rarely follows reason.

Read on for my thoughts on Some Guys Need A Lot Of Lovin’.  No true spoilers, promise.

Marcus had been the happy go lucky, always with a joke Weston brother.  Popular with women, other guys and especially his team of kids on the playing field.  He would have told you straight out that he would be the last person dealing with PTSD.  Until that horrendous day in the aftermath of the bushfires when he and his partner came upon the burned out skeleton of a car… a car with the bodies of a family within.  Newcomers to the area, they hadn’t gotten out soon enough.  The mother and father huddled over their small son was testament to their love for their child… a child that Marcus new well, the star of his team.  From that moment onward Marcus was a changed man with little hope of finding his way back from hell.

Juanita only planned to be in Jumbuck Springs for a short time.  It just happened that she was here away from friends and family on her birthday.  And didn’t a girl deserve a present on her day?  When the handsome man at the bar helped her with her celebration, she got more than she bargained for.  Sexy, steamy  and all hers for the  night, Marcus made certain that this birthday would be one she remembered.

A short time later Marcus and Juanita met up again – under circumstances neither expected.  Marcus had been given the ultimatum to get therapy for the trauma he’d gone through in the fires or pack up his gear.  He really had no choice.  She would have been the doctor to help him deal with the death and destruction of the fires – if they hadn’t done some personal firemaking of their own recently.  So professionally she wouldn’t be able to help him heal.  But that didn’t mean that she couldn’t follow through on the attraction between them outside of the hospital.  This was a man wounded, perhaps beyond what she could do to help… but she couldn’t turn her back on him.

I love when an author can take a series surrounding a family unit and get me to care about each and every one of them as though they belonged to me as well.  Ms Andrews has hit upon several realistic and sensitive subjects in the Outback Heat series.  I hope you’ve followed the series so far (and if not please go back and do so soon) because the scene when Marcus found the burned out car, before he even got close enough to it to know who was inside was one of the most goosebumps, heart wrenching scenes I’ve ever read.  The emotions coming off of the page were beyond description.  Now we’re given the chance to watch Marcus deal with that tragedy and hopefully find some healing for himself.

Juanita and Marcus make an amazing couple.  It was at times heartbreaking and then they would be steaming hot together.  At times the reader knows when the main characters really need each other — this is how I felt about Marcus and Juanita.  The need for each other on so many levels was part of what made Some Guys Need A Lot Of Lovin’ probably my favorite story of the series.  You do not need me to tell you this story — you do however need to go pick this one up and become involved in this amazing family and the people who love them.  This one is well worth the risk for the reward is a well told story with believable characters and a storyline throughout the series that will capture your attention.

*I received an e-ARC of Some Guys Need A Lot Of Lovin’ from the publisher and NetGalley in exchange for an honest review. That does not change what I think of this novel.*

Available for the Kindle.

« Jace by Alisa Woods
Every Little Kiss by Kim Amos »