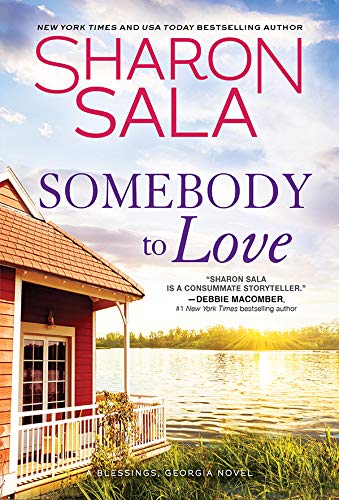 Welcome to Blessings, Georgia! Whether you’ve lived here your whole life, you’re returning after years of being away, or you’re new in town, you’re sure to find the unforgettable love you’ve always been looking for.

Fifteen years ago, a family member stole the money Hunt Knox had saved for college, while three of his siblings and his father hid the truth and told him to get over it. Betrayed by their lies and thievery, Hunt joined the army and wound up flying Apache helicopters in Iraq. Now, he’s a chopper pilot for an oil company in Houston, Texas, his father has been dead for six years, and he’s finally returning home to Blessings at his mother’s dying request.

Ava Ridley, the little girl his mother used to babysit, has grown up and is a nurse at his mother’s bedside when he arrives. Ava is overjoyed to see the man her childhood crush has become. And as the two spend more time together, Ava’s crush grows to be even more.

Hunt never expected to fall in love, but just as it appears he and Ava are headed for a happy ever after, she becomes a victim of violence at the hospital ER in Blessings and suffers an injury that could cost her life. Through secrets, lies, family betrayal, and difficult choices, Hunt’s not sure he and Ava can ever make a home together in Blessings. Or if life will once again lead them onto different paths…?

Titles in the Blessings, Georgia series include –  You and Only You – I’ll Stand by You – Saving Jake – A Piece of My Heart –The Color of Love – Come Back To Me – Forever My Hero – A Rainbow Above Us – The Way Back to You – Once in a Blue Moon – Somebody to Love – The Christmas Wish –

Somebody to Love returns us to Blessings, Georgia for another taste of this unique small town, and for answers to finally be found for one man who left fifteen years ago after a family betrayal changed the course of his life.  One of the things that I enjoy about this series is that although you get a more solid understanding of this town, the community, and its residents if you’ve followed along from the beginning – it is a series of standalone romances that you could, if you wanted, just pick up a book here and there and not feel like you’ve missed important details.

For Hunt, returning home is a bittersweet trip, one he’d rather not be taking for he swore to never return after his siblings and his father closed ranks and wouldn’t tell him who had stolen a large amount of money he’d saved up for college.  He left, joined the military as a helicopter pilot, and never looked back aside from keeping in touch with his mother.  Now his mother is dying and he’s returning to be with her before death steals the one person he cares about from him.  His reassurances that he will be the executor for her will, that he can follow her instructions to the letter seem to give his mother some final peace.  In an abstract way, he was aware of the nurse at his mother’s bedside, he was after all focused on his mother.  But soon he came to realize that he knew this woman or he had known the child she once was.

Long ago Ava had a serious childhood crush on Hunt but he wouldn’t have noticed back then and soon he would leave town so that crush went nowhere.  Now with Hunt back at his mother’s bedside, and dealing with her wishes Ava has to admit that her crush never went away, and the man Hunt has become is even more than she remembered.  But once he’s fulfilled those wishes for his mother Hunt has no intention of staying in Blessings.  Anything between them wouldn’t stand a chance, right?  But that doesn’t stop the feelings that Ava has, very adult feelings that she has every intention of acting on now.

Somebody to Love was a story that captured my imagination and my emotions quite easily.  While there were things that I wish had been developed a bit more, it’s not my story to write only to read and enjoy.  Hunter does get answers, I don’t know if he really got closure but answers.  Family betrayal is a hard situation for anyone no matter the reasons.  It had shaped Hunt into the man he is now, who knows what he might have been had he been able to go to college and chose a different path in life.  That will always remain unanswered for Hunter.  There were moments of deep emotional impact in this romance, times when I chuckled out loud, got intensely angry, or tried my best to keep tears at bay.  There are sub-stories going on in Somebody to Love, events in town that impact everyone including Ava and Hunter.

In all, I enjoyed my time in this world once again, and look forward to the Christmas release later this year.