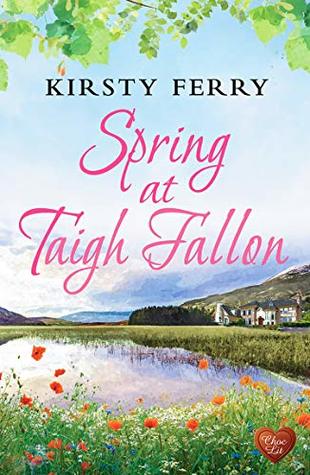 SPRING AT TAIGH FALLON is a beautifully written story that is part romance, a touch of time slip, just a bit haunted and completely enjoyable and compelling.  Once started it’s difficult to leave this world even for short breaks. (I even managed to hold off on a coffee refill for a couple of chapters – and nothing keeps me from my coffee addiction *Grin*)  Told with a dual timeline and more than a hint of ghosts, hidden passageways, mystical happenings and a feeling of magic just out of reach, SPRING AT TAIGH FALLON will capture your attention and hold you captive throughout.

I adored Angel with her love of all things Victorian, a touch of Gothic surrounds her at any given moment.  She’s loyal, at times brash, outspoken and will defend her best friend against anything or anyone… including a man who draws her to him even as he angers her like no other can.  Angel and Kyle worked well as a couple, their bantering, arguing and telling glances spoke just as much as their actual words did.  I loved Zac and his man certainly deserves his own story and his lifetime love as well.  But the real shining personality of them all is this aging, regal, mysterious mansion that has seen so much and still stands only reluctantly giving up its secrets to Angel, Kyle, and Zac.

SPRING AT TAIGH FALLON is a story that needs to be read to completely appreciate the nuances, the feelings that all the characters and the mansion will envoke in each reader.  I was captured by this story and I’m definitely looking forward to the next in the series.  If you love a good romance, a sense of moving between time periods, a bit of a mystery and beautifully described buildings with stories of their own to tell then you’ll feel right at home in this world.  I loved my time here and would not hesitate to recommend it to any reader of Romance, no matter your favorite genre.