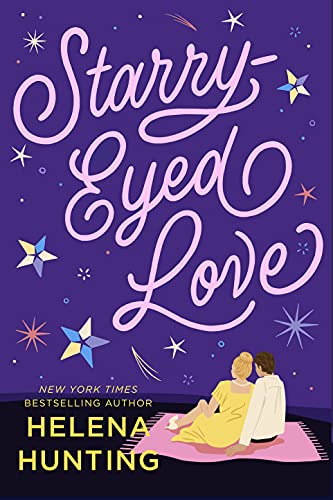 Starry-Eyed Love is the second title in the Spark House series, and what an emotional, slow-burn romance it turned out to be.

Being newly single after breaking up with her former boyfriend all London wanted was a girls’ night out with her sisters in celebration of her new single and perfectly okay with that status.  The last thing she was interested in was a new relationship.  She had a business to run and a life that needed to focus on Spark House, an event-focused hotel that had been in her family for generations.  So when a handsome man buys their meal and slips her his phone number London replied with a firm no thank you… and moved on with her life.  She had no idea that they would meet again under very different circumstances.  Or that Jackson was exactly what their business needed, and the perfect partner she’d been looking for in her personal life.

Yet they each have a strict rule of no dating clients, no romantic entanglements on the job.  Which made Starry-Eyed Love a unique romance where the focus was divided between the slowly developing feelings between London and Jackson, as well as being life/work balance strong in the delivery of their slow-burn romance.  Throw in some drama with her sisters and how they don’t always agree on how to move Spark House forward and you’ll find an interesting romance with a couple who takes the slower route to love by working together, getting to know each other, and their pasts, and steadily ratcheting up the emotions, the attraction as they approach the end of the project they’re working on to the time when work no longer will be a barrier to what might be between them.

I enjoyed this couple and their story where the attraction was strong but the characters were mature enough to separate the personal from the business relationships even while still enjoying learning about each other as their personal interactions became stronger.  I found them to be believable, and even though I had not read the first story in this series, the overall feeling of their story (and the sisters’ involvement) was easy to follow.  But I will go back for the first story soon.