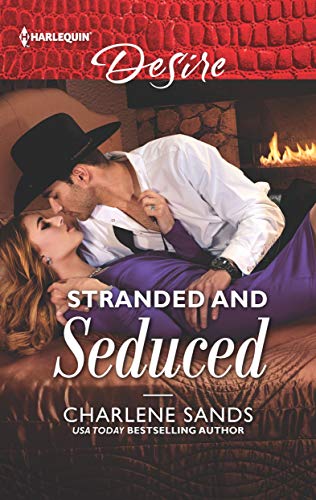 ‘Stranded and Seduced‘ is the second title in the ‘Boone Brothers of Texas‘ series.  And one sizzling with chemistry, and flowing with charm romance as well.  I’ve been spending some time lately getting caught up on series or trilogies that I started but life got in the way of finishing at the time.  I’ll admit to being just a bit in love with each Boone brother and by this story’s ending, you will definitely have a soft spot in your heart for Risk…. after you want to smack him upside the head for his stubbornness and then sit him down for a stern talking to about reality checks.  But I get ahead of myself.

April and Risk are certainly no strangers to each other outside of living in the same small Texas town.  They’d had one amazing night right up until Risk messed it up leaving without a word letting April believe the worst of him and herself.  Years have passed, life moves on and now Risk is back in Boone Springs working with his brothers, looking into perhaps opening up a lodge.  It just so happens that April’s real estate agency has the perfect property, if she can convince Risk to see beyond the work needed and envision what it could be.

Now, April’s friends know how badly she was hurt by Risk’s actions years ago, and how with very little encouragement she could fall under his spell once again.  So.  They propose she wears a friend’s grandmother’s engagement ring – as protection of sorts, and a reminder to not fall for this man again.  The only trouble is… it worked a bit too well.  When Risk is injured while inspecting the lodge during a strong storm he wakes up with little memory and seeing the woman who is taking care of him and the engagement ring on her finger… well, assumptions were made, and allowed to stand, for now.  It’s when memory returns that things get complicated with anger, accusations, and a famous ex-girlfriend making a play.

I was so caught up in ‘Stranded and Seduced‘ that I didn’t really notice time passing only to look up at the ending and see that night had fallen.  So, yeah, you could say I completely enjoyed myself with Risk and April’s romance.  There are anger and hope, tears and laughter, family and foes to be found in this story.  I loved Aunt Lottie, and her own romantic situation just added to the enjoyment.  I had a blast and I’m betting that you will as well as you watch two people who really do belong together work that out between frustration and sizzling attraction.  If you love a really good romance that will keep you flipping pages, believable characters, and a secondary cast that brings the book to life then you’ll want to check out ‘Stranded and Seduced‘… like right now.

« The Rebellious Rancher by Kate Pearce
Sunny Days At The Beach by Morton S. Gray »