Sucks To Be Me by Kristen Painter 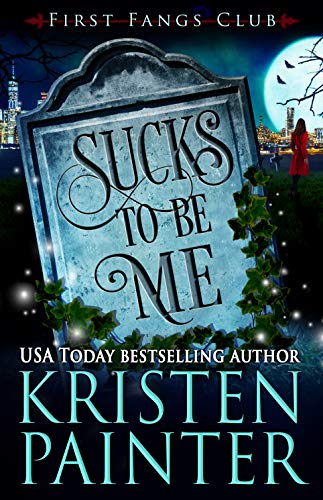 When 49-year-old Belladonna Barrone’s mobbed-up husband does her the favor of dying in a car accident, she thinks she’s finally free of the crime family she unwittingly married into. Then the boss tells her that she has to complete her husband’s last job before that freedom is truly hers.

No big deal, she figures. Until things go south in ways she never imagined. Suddenly she’s thrust into a whole new world that makes the mob look like kindergarten. Vampires and werewolves are real? How is that freaking possible?

Her dreams of a new life disappear faster than wine at book club as more problems arise from her husband’s dark dealings and the unbelievable complications caused by her supernatural entanglements. Only her strength and determination (and some wild new friends) will see her through this next chapter, but the odds are against her.

How much more can her life suck? She’s about to find out…

Sucks To Be Me has everything I crave in any Paranormal, add to that an addictive story, characters that leap off the page, some vile villains, some hot men, and some pretty amazing new friends – now I’m officially hooked on the First Fangs Club series.

Donna (Belladonna) is one badass heroine who doesn’t really need any “saving”, she’s more than capable of handling most of what life tosses at her – except being attacked by and turned into a vampire probably falls outside of that zone.  But still, she handles this life change with class, sass, and curiosity.  Heck, if she can face down her dead husband’s Mafia boss she can handle the vampire life.  There are going to be a lot of changes, dangers, and discoveries in this new life, yet Donna faces them down one by one.  I was captivated by this story, and as I said, hooked from the very start.

I could say that Sucks To Be Me is an emotional story, and it is just not in the usual emotions you’d be expecting.  There is a lot of anger here for what her husband has sucked her into and his actions throughout their marriage, being attacked and turned was not on her life plan schedule either, and one sire with a major attitude just makes life all the more irritatingly interesting.  There is also that sense of surprise, anticipation, of not really knowing what’s going on, what may be around the next corner in this new life.  I found this world, this plot, and these characters fascinating and I cannot wait to return to this world full of vampires, werewolves, fae, and who knows what else.

I don’t want to give much away so I’ll simply say that if you love the Paranormal world, a bit of mobster involvement, some new friends who will have you in laughter quite easily, and two men who will play a huge part in Donna’s future – then this is a story you’ll want to pick up right now.  It’s addictive and you’ll be wanting more.

I read this title through my Kindle Unlimited subscription.  At the time you read this review this title may have left KU and is available on all platforms, so be sure to check that.

Available in paperback, audio, and your favorite e-reader – mine is Kindle