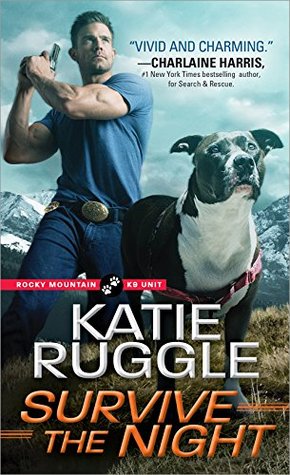 He’s always been a haven:
For the lost. The sick. The injured.
But when a hunted woman takes shelter in his arms, this gentle giant swears he’ll do more than heal her battered spirit―he’ll defend her with his life.

K9 Officer Otto Gunnersen always had a soft spot for anyone in need. As Monroe’s very own Dr. Doolittle, he dedicates himself to rehabilitating the injured souls that cross his path―but for all his big heart, he’s never been in love.

Until he meets Sarah Clifton’s haunted eyes. Until he realizes he’ll do anything to save her.

All Sarah wants is to escape a life caught between ambitious crime families, but there’s no outrunning her past. Her power-mad brother would hunt her to the ends of the earth…but he’d never expect Sarah to fight back. With Otto and the whole of Monroe, Colorado by her side, Sarah’s finally ready to face whatever comes her way.

It’s time to take a stand.

Titles in the Rocky Mountain K9 Unit series include:  Run To Ground – On The Chase – Survive The Night –  Through The Fire –

I always expect an intense and interesting story from Katie Ruggle, and Survive The Night was no exception to that rule.  As the daughter of a crime boss and the sister of a crime boss, Sarah aka Alice is really nothing more than a pawn in a huge power game to her family.  Practically a prisoner in her own home Sarah is rescued by a stranger and re-creates her life in a small Colorado town.  She wasn’t expecting to find love, and she certainly had hoped that her past wouldn’t find her again.

Otto is such a gentle giant with Sarah.  But don’t cross this man for he knows how to protect.  While Otto and Sarah have somewhat similar personalities there are enough differences to make then a believable couple.  When Sarah is threatened once again it is Otto that she depends on.  Trust is just as important as love and she’d easily place her life in Otto’s hands.  Now they just have to survive to celebrate a future together.

Survive The Night is another intriguing story in the Rocky Mountain K9 Unit series.  You don’t “have” to have read the two earlier books, but since they are both really good stories I would recommend them.  You’ll run into characters from those books, but their places in this world are easily explained without fuss.  We will run into a well known villain, and add some new ones as well.  Fast paced, suspenseful and yet quiet and endearing with Otto’s and Sarah’s romance.  This was an interesting story, one that kept me turning pages and hoping for the best throughout.  I’d not hesitate to recommend Survive The Night to any Romantic Suspense reader who loves a compelling story, believable characters and a strong tight knit supporting cast who have or will have their own stories told.