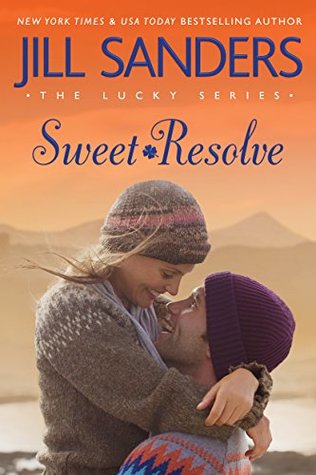 Amy Walker is steps away from her perfect job. The day she makes partner at her real estate firm will be the happiest of her life, second only to the day in junior high when her tormentor, Logan Miller, finally moved away. But fate has a warped sense of humor, because Logan is back. In her town, in her office, gunning for the same promotion. Worse, the man is sinfully hot. But that won’t keep Amy from exacting the revenge he richly deserves…

Logan had reasons for acting wild in his youth, but he still regrets the way he treated Amy. Especially once he’s sharing an office with the smart, self-controlled beauty. For one thing, she’s got a wicked sense of payback. For another, he’s realized there’s something he wants much more than a promotion. And that’s to melt the ice he helped form around her heart all those years ago and to prove that loving thine enemy can be the ultimate happy ending.

Read on for my thoughts on Sweet Resolve.  No true spoilers, promise.

Sometimes fate will simply wander along and bite you on the butt when you least expect it.  Pretty much what happened to Amy and Logan.  Amy is pretty sure that partnership is hers, hands down, wrapped up.  Until a blast from her past shows up at the company and threatens to take away what she’s worked so hard for.

Logan is back in town, taking aim at a position that Amy intends for herself.  He knows he was a jerk to her back when they were kids.  And he’s more than willing to be the butt of her retaliation pranks because the truth is, he deserves the treatment she’s dishing out.  Yet there were reasons as to why he acted out like he did all those years ago.  And as Amy becomes more important to him, as love begins to take a realistic root in his emotions it becomes so important that Amy understand why he was that kid – and to understand the man he’s become, perhaps because of it.

I found Sweet Resolve to be one of those stories that you can take away a lot of emotional feels from, if you’re looking beyond the surface of a lighthearted romance.  Amy is feisty, strong, independent and determined to get what she deserves – whether it’s the job or the man.  She has some edges, a keen sense of payback humor but at the core she’s a girl who when she falls in love she’s in it for life.  Logan became a man he could be proud of and that matters to him.  Yes, he did some not so kind things in his younger years, and he definitely regrets the hurt he caused.  When he realizes that the grown up Amy is still the one for him, Logan will put up with a lot and invest even more in convincing her that they have an honest shot at that happy ever after.

I enjoyed Sweet Resolve very much.  If you’re the type of Romance reader who lives for the “feels” then you have found the just right book for you.  Amy and Logan’s road to romance happiness isn’t totally smooth, but the journey to get there is certainly a trip worth taking.  I would recommend this one for any Romance lover no matter the genre.

*I received an e-ARC of Sweet Resolve from the publisher, Montlake Romance and NetGalley in exchange for an honest review. That does not change what I think of this novel.*

To Catch A Lady by Pamela Labud

To Catch A Lady by Pamela Labud