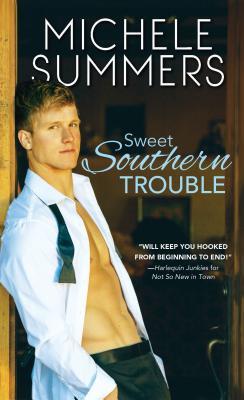 An ambitious Southern belle
Marabelle Fairchild knows she’s a gal who can get things done. Feeling unappreciated at the exclusive private school where she’s a kindergarten aide and varsity tennis coach, Marabelle determines to score with the next big fundraiser. What she doesn’t expect? A smokin’ hot football coach to throw her off her game…

A reclusive NFL bachelor…
NFL coach Nick Frasier is Raleigh’s most eligible bachelor, but he wants to focus on his career…not his playboy status. He doesn’t need a smart-mouthed, pint-sized kindergarten teacher pestering him. So he cuts Marabelle a deal—in exchange for Nick sponsoring a bachelor auction starring him and his gorgeous celebrity pals, Marabelle will pose as his fiancée to ward off unwanted advances.

What could possibly go wrong?

Sweet Southern Trouble got off to a slow and questionable start with me.  It’s difficult when I’m not liking the couple from the start to stick with the story and give them a chance to grow on me.  But I’ve learned over the years that is exactly what needs to be done with some books, and some characters.  I’m glad that was the attitude I took with this story as Marabelle and Nick do indeed come into their own personalities, and they have quite an endearing story to tell.

The fake relationship story line can work for me with the right people.  I want that spark of something to be there that holds out hope for more than the fake down the road.  At first Nick comes off as – well, a jerk, an entitled jerk.  That is what held me back from liking him as the story began.  Marabelle is, let’s call her unique.  She’s a spitfire, determined young woman with a lot hidden behind that outer shell.  I want to say she grows on you as her past, her present are made known to us.  Each has an agenda, each needs something from the other and along the way they’re going to figure out that fake isn’t going to work for them.  It’s got to be the real deal or nothing at all.

I enjoyed Sweet Southern Trouble, even though it took some determined reading to get to that point.  I believe there are some readers who will stop just short of finding the fun and enjoyment of this couple, and that is honestly a shame.  For those readers are going to miss out on a good story, and the realization that not everything has to smack you in the face from the start.  Sometimes some slow buildups deliver the best stories.

Would I recommend this one?  Yes.  Yet I’d also say to give it a chance to touch your reading emotions.  Not everything is known at the beginning, and sometimes first impressions have to be re-evaluated.  So give Sweet Southern Trouble a chance to work it’s Southern charm on you.  It’s well worth the time.

« Burning With Desire by Patricia W. Fischer
A Piece of My Heart by Sharon Sala »